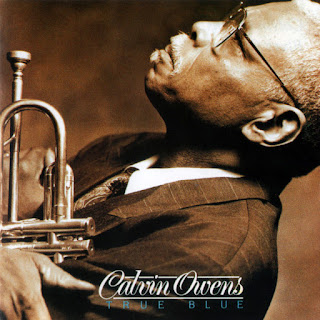 An inventive and creative trumpeter, bandleader, and composer/arranger, Calvin Owens spent many years as musical director with B.B. King's various touring bands. But beginning in the late '90s, he led his own bands and recorded under his own name. Born on April 23, 1929, Owens grew up in Houston's Fifth Ward neighborhood, also known as Sawdust Alley because of a nearby sawmill. He became interested in learning to play the trumpet after hearing his New Orleans-raised mother talk about Louis Armstrong. He worked at a local bowling alley to save enough money to buy his first trumpet. As a 13-year-old, he took his first few trumpet lessons, at 25 cents per lesson, from a local trumpeter, Charles "Papa Charlie" Lewis.
Fortunately, Owens had a conscientious band director in high school, Sammy Harris, who took a bright, ambitious student and suggested to the young Owens that one day he too could be a band director for a high-school band. Harris promoted Owens to student director of the high-school band. After he graduated from Wheatley High School and after several years of playing in Houston's then-lively blues club scene, Owens joined guitarist and bandleader B.B. King on his tour bus in 1953. He stayed on the road with King's orchestra for four years, returning to Houston with the idea that he would finish his college education at Texas Southern University. That didn't happen, and Owens was called back to working in the clubs -- the gigs were there -- and working in the local Maxwell House Coffee factory to support his family. His nights were free, so he could play music in clubs and keep his chops together while earning the income needed at the factory to raise a family. In 1978, Owens rejoined King's band and stayed on the road, 200 nights a year, until 1984. When Owens began playing trumpet professionally in and around Houston, trumpeters were the soloists, not guitarists. It wasn't until he first joined King's band in 1953 that he played with a guitarist who would solo and became aware of that instrument's possibilities for carrying on solos and helping to lead a band. Aside from Armstrong, Owens frequently cited white trumpet player Harry James as a huge influence during his formative years, even though Owens was raised in Houston's predominantly African-American Fifth Ward. Because of James' prominence in motion pictures and Armstrong's appearances in films from time to time, both musicians offered a model of inspiration for then-teenager Owens. Aside from working with King, at various times throughout his long career Owens played trumpet with T-Bone Walker, Amos Milburn, Big Joe Turner, Junior Parker, Johnny "Clyde" Copeland, and Otis Clay. He also worked with a long line of virtuoso blues-based jazz musicians from Texas, including saxophonists Arnett Cobb and David "Fathead" Newman.In the 1980s he started his own band and settled in Belgium, the home of his second wife. In 1997 he returned to his native Houston. There, he released his first album under his own name, Another Concept, which fused the blues with everything from jazz to rap music. Owens' recordings for his own Sawdust Alley label include True Blue, That's Your Booty, Another Concept, The Best of Calvin Owens, and The House Is Burning. Of the lot, True Blue is a fine introduction to Owens' vast repository of trumpet-playing ideas. The album includes contributions from King, Copeland, and Newman. "True Blue" was also the nickname that Cobb had given to Owens many years earlier, for his steadfast dedication to and creativity within the realm of blues trumpet. Despite being diagnosed with liver cancer in the mid '2000's, Owens continued to perform and record appearing with saxophonist Evelyn Rubio on her album La Mujer que Canta Blues and releasing his own disc Houston is the Place To Be in 2007. Ultimately, Owens passed away at age 78 from kidney failure in Houston on February 21, 2008. ~ Richard Skelly, Rovi