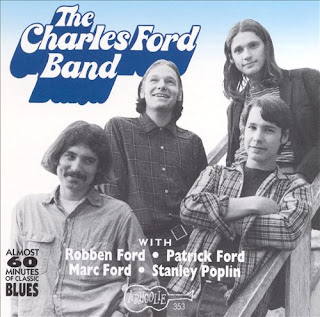 In 1971, Patrick and Robben Ford decided it was time to leave Charlie Musselwhite's band and start up their own unit. They called on long time friend Stan Poplin to join them on bass and the youngest Ford brother Mark to play harp. This was a four piece blues band that was to have a lasting impact on the modern blues scene and proved to be only the beginning of four solid and successful careers. The band was named the Charles Ford Band after the father of the three brothers, a man who had always been supportive of their musical ambitions.
What is especially impressive about this band is that the oldest Patrick, was only 20, with Robben and Stan being just 18, and Mark a mere 15 years of age. Also notable is the fact that they came from a small lumber town in northern California called Ukiah, where blues music was not something that one heard a lot of. The only blues they knew was that played by the English bands like the Rolling Stones and the Animals. As children the Ford boys had been sung songs from the country and blues tradition by their father and their mother, but it was the first Paul Butterfield Blues Band LP, which arrived at the local music store by mistake, that changed their lives and ignited their passion for the blues idiom. With the purchase of that record they began searching out all the information on the blues idiom they could find, constantly buying new recordings of artists like BB King, Muddy Waters, Howling Wolf, and more. They also began making the 2 hour drive to San Francisco to attend concerts at the Fillmore to see the blues artists like BB King, James Cotton, Buddy Guy, and others who were booked there.
Because the band did not come from one of the major blues centers their musical influences had been very different and they did not mind using those other influences in their approach to the idiom. During the course of gig you could expect them to be playing anything, from Muddy Waters to Martha and the Vandellas to John Coltrane, but at the root of it all was their affinity for the music of the blues masters.
Though the band was only together for about a year, during that time they received four serious offers from record companies and began to create quite a stir on the West Coast. Just when the band broke up they had been given an offer to record a Lp for Chess Records to be called Muddy Waters presents the Charles Ford Band. Muddy had been so impressed by the band when they had opened for him in San Francisco that he went back to Chicago and told them to make the deal. Sadly, it came too late.
However, months later, Chris Strachwitz of Arhoolie Records called Patrick and offered to record the band saying that something should be left behind for history. This led to the Arhoolie title "The Charles Ford Band" released in 1972. It is considered a modern blues classic and still sells to this day.
It was not until Charles Ford passed away 10 years later that all four got back together to do a few reunion dates and do a live recording to be dedicated to the brothers' father. This was to become the first release on the new Blue Rock'lt Records, The Charles Ford Band "A Reunion."
Because they enjoyed doing the reunion gigs so much, the four were to continue to get together to do dates on several occasions over the next several years. Patrick took advantage of those gigs to do some more live recordings. From those dates was to come the "As Real As It Gets" CD.
While all four band members have gone on to separate careers, they continue to get together in the studio or on the stage to create the innovative modern blues for which they are famous.