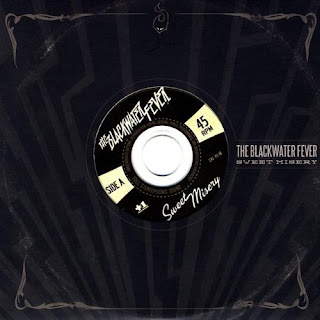 Band that definitely has potential for great things.
If you like blues rock I suggest you check out The Blackwater Fever. They are composed of a guitarist/vocalist "Shane Hicks" a drummer "Andrew Walter" and a keyboardist/bassist "Jed Walters". If you like bands similar to The Black Keys or The White Stripes this could be your band. Of course they sound different enough to have their own style as well.
The first proper song after the Intro is "Blackwater" which is probably one of their most known songs. You will immediately notice this has a nice catchy little beat going. Simple rolling drums and a nice blues guitar lead make this a track you can really jam out too. Another great track and possibly recognizable track is "Better Off Dead". This song takes a more mellow approach but is still extremely catchy sounding. The lyrics and vocals in my opinion are just a tinge better then that of "Blackwater". I would say it's arguably a better song in whole. However my favorite song on this album is the title track "Sweet Misery". It is a very somber sounding song in the best way. From the dramatic violin introduction to the end of the track where Shane Hicks does a very haunting "oooooooooh" through some very catching and beautifully done guitar and violin work. I only wish this song was a bit longer as there is not very much vocals in it.
All in all the instruments are very well played in this. The drum pops and keeps a nice rolling beat all the way through. The guitar plays is very easy on the ears and whines and squeals to keep things interesting. If I had to pick out a flaw with this album I would say it's in the lyrics. They are very simple and some songs just don't have many in them. That's not saying they are bad, but they are very straight forward. Also almost all the songs are about love, heartbreak ect. There is not too much in the terms of variety. However this is a very quality cd all the way through and should appeal to any blues rock fans or garage band fans.