King Daady Zeb - Get The People Together 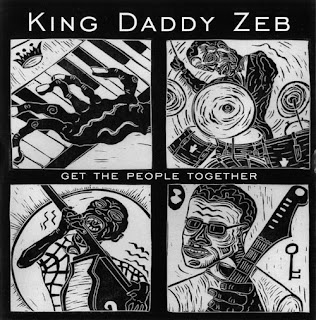 Piano-based new orleans, boogie-woogie, funk and blues from Athens, GA's piano man, Jason Fuller.
Five years ago, Athens-based musician Jason Fuller - who's played in, oh, about 2,000 bands - formed his own group, King Daddy Zeb. The guys toured the region for a good two years, bringing what they called original piano-based New Orleans Boogie Woogie to a number of stages around the Southeast. In late '97, King Daddy Zeb released Get the People Together, an album of original music set to get the crowd shifting back and forth, dancing and sweating like it was any ol' gnat-filled bayou night. In late '98, however, the members of the group decided to go their separate ways, and Fuller focused on working with many collaborators (how's this: Tishamingo, Ween, Stewart and Winfield, the Charlie Mars Band, Kinchafoonee Cowboys, the Healers, Don't Know Blues Band, the Nathan Sheppard Band, Cosmic Charlie, the Blue Dogs, Park Bench Blues Trio and Sister Hazel).
This album really rocks. For anyone who enjoys soulful, piano based music, you should really check out this textbook of blues-laden material. Jason Fuller and crew are masters of thier craft. Keep up the good work!!!!

Get The People Together
Автор: errny на 20:48