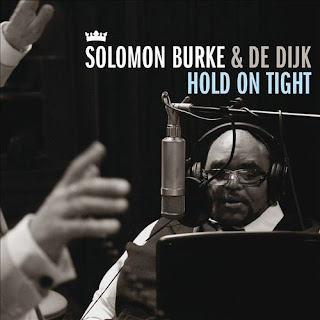 Of the great soul singers of the 1960s, Solomon Burke was one of the few whose talent and power to compelled an audience never dimmed with the passage of time; if the larger audience overlooked his music through much of the '70s and '80s, and he wasn't always paired with songwriters or producers who knew what to do with his instrument, Burke himself remained The King of Rock & Soul, an artist whose music spoke powerfully with heart and soul whenever he raised his voice. Burke's mighty voice was finally silenced by his passing in October 2010, but it should come as no great surprise that the last album he finished before his death confirmed he was in full command of his talents right up to the end. What is somewhat surprising are his collaborators on his final project. De Dijk, a veteran Dutch rock and R&B band, are little known in America but they're stars in the Netherlands, and they struck up a friendship with Burke when their paths crossed on tour in 2007. The 12 songs on Hold on Tight were adapted from tunes in De Dijk's back catalog, with Burke helping to translate the lyrics into English, and lead singer Huub van der Lubbe moving over to acoustic guitar for the duration of the sessions. The strength of Burke's performance is not unexpected, but De Dijk turned out to be an inspired musical match: the band's robust fusion of classic soul and bluesy hard rock swings hard and Burke's vocals roll right along with them, filling in the spaces in the arrangements and adding a powerful shot of gospel-inspired fervor to the swagger of the guitars and horns. The melodies are clearly influenced by the structures of classic soul with an added energetic punch, and if the sound is something different from the stuff of Burke's heyday, it's close enough to give him the right platform for his declamatory style. Also, the musicians sound like a real band, intuitive and understanding the push and pull of the music, and Burke sounds like he's having a grand time working within their formula. Hold on Tight isn't revelatory like Burke's 2002 "comeback" set Don't Give Up on Me, or his 2006 pairing with Buddy Miller, Nashville, and it's not a latter-day soul masterpiece like his collaboration with Willie Mitchell, 2010's Nothing's Impossible. But it's a stronger and more satisfying piece of work than most of his other post-millennial albums, and it's the closest thing he managed to a truly effective rock & roll collaboration; it's an impressive finale to a genuinely remarkable career.