Bekka Bramlett - What's In It For Me 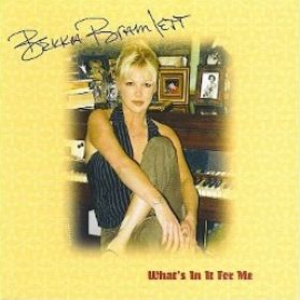 Lazone Bramlett (Bekka) was born to Delaney and Bonnie Bramlett.The Bramletts were a successful duo in the early 70’s, having gained fame by blending a unique combination of country, rock and roll, gospel, and R&B. They performed along with the musical geniuses of their era, and hit the top of the charts. Delaney and Bonnie go down in music history with vocal and writing credits of hits like “Only You Know and I Know”, “Superstar”, etc. It is little wonder that Bekka finds herself in the musical world she lives in today.
Growing up in a home where the likes of Eric Clapton, Jimi Hendrix, Roger Miller, Tina Turner, The Rolling Stones and George Harrison might turn up at a moment’s notice, and stay as houseguests for days on end, was the norm for this young lady. Bekka was only four when she sang on her first record at United Artist Studios in Hollywood, California.
Bekka, who replaced Stevie Nicks in the Iconic band FLEETWOOD MAC, from 1993-1997, earned her rightful place in history with her musical prowess. Her forward-thinking attitude and sound had her recording duets with the likes of Billy Joel, Joe Cocker, Rod Stewart, Dwight Yoakum, Vince Gill, Johnny Lang, the legendary “Soul Man” (Sam and Dave), Sam Moore, Bad Company, Kenny Rogers, John Waite, Delbert McClinton and more.