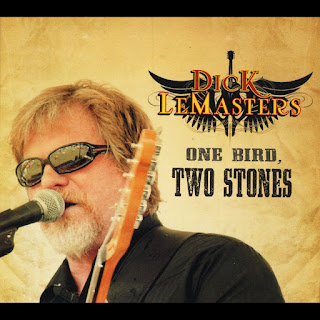 A blend of Americana, Roots rock, blues and Texas music! Mix some Steve Earle, ZZ Top, and Drive-By Truckers up together and you'll be right there!
Dick LeMasters performs original Americana and Texas music as a solo artist, with duo partner Douglas Greer, and with the band Longneck Road. LeMasters was born and raised in Beaumont, Texas, and grew up listening to artists such as Jerry Jeff Walker, Ray Wylie Hubbard, and Joe Ely. His original songs reflect that background as well as the influence of current favorites James McMurtry, Mike Cooley, Steve Earle, Paul Thorn and Fred Eaglesmith. LeMasters performs in Southeast Texas and Austin, and is a regular performer at the Songwriters’ Cafe event in Beaumont, Texas.
The following is a description of the songs that appear on the brand new Dick LeMasters album One Bird, Two Stones.
I have always felt that I could say things in my song lyrics that I could never say in real life. Kind of like Jim Croce’s line: “I’ll have to say I love you in a song”. I like the fact that nobody knows for sure whether a song is simply the product of creative writing or whether it’s the only socially acceptable way to communicate something that you really feel or believe, or need to say to someone but never could in any other way. Putting the inspiration and stories down in black and white is a little scary to me; however, my public relations man deems it to be a positive step. So, here goes.
I write songs with the intent that they will be songs that I will perform at my shows. If I ever write a song that is good enough and it gets heard by the right person, some big-time singer might record it and I might actually make some money off of my musical adventure. Fingers remain crossed. For now, I have recorded an album of eleven songs that I wrote. The album is titled “One Bird, Two Stones,” which is also the name of one of my songs. Throughout the process my friend, music duo partner, oftentimes background vocalist, and aforementioned public relations man Douglas Greer has offered valuable advice and guidance. He suggested that I write a brief description of the inspiration and story behind each song on the album. This is that.