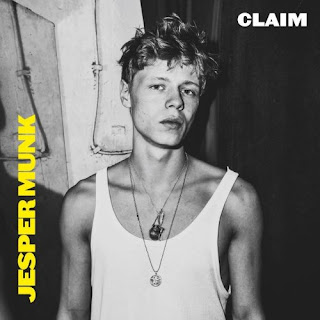 Eighteen months after the release of his highly acclaimed debut album, Jesper Munk now presents his second: CLAIM, a musical journey from Los Angeles via New York to Munich and the more rural surroundings of Niederding. This time Jesper has spent time with the producers Mocky (Feist, Jamie Lidell), Jon Spencer (Jon Spencer Blues Explosion, Heavy Trash, Pussy Galore) and Sepalot (Blumentopf), who bring new enhanced features to his work, along with his own productions. He has extended his spectrum as a singer, songwriter and guitarist with 14 exciting songs from Rock, Postpunk and Glam to Folk and Soul without ignoring his Blues beginnings. This variety is held together as a matter of course by Jesper’s extraordinary voice, which has never before been heard in such intensity. “CLAIM” brings the listener into the musical world of a young man who wears his heart on his vocal cords.
Time flew by for Jesper Munk. While still singing as a street musician, he was discovered through radio and hailed as a “Wunderkind” with a voice from the Mississippi Delta and pin up looks. His career took off. The first album “For In My Way It Lies” attracted rave reviews from audiences and media alike and led to three solo tours through Germany plus supports for legends such as Michael Hurley, Willard Grant Conspiracy and Eric Burdon & the Animals as well as top German acts such as Saint Lu, Bosse and Sportfreunde Stiller. The 22 year-old Danish-German almost single handedly made Blues and his style of playing popular for a new generation in Germany. It now seems hardly surprising that the music press soon made comparisons with the likes of Jack White, The Black Keys and Gary Clark Jr.
That however was just the beginning. In his new album “CLAIM” he goes off the beaten path, taking himself and the listener into unchartered musical territory with the help of accomplished but stylistically different producers. It opens with the Blues-Punk “Courage for Love”, produced by Jon Spencer in the legendary N.Y. Hed Studio of Matt Verta-Ray on the Lower East Side. This is followed in altogether different fashion by a Soul ballad “Morning Coffee”, more in the style of Al Green or The Commodores. The “imaginary” James Bond soundtrack “Shakespeare and Heartbreak”, produced by Sepalot, is accompanied with beats and brass, while “Ya Don’t Have To Say Goodbye” picks up speed and takes us in J.J. Cale-style to West Coast USA and the Kingsize Soundlabs with Mocky and his resident session musicians.
A quieter and more serious tone comes with dark bass and keyboards in “Soldiers of Words” and “Clean”, in which the singer offers a personal insight into the world of his soul and feelings. “White Picket Fence” would have found admirers among the post punk crowd of the late 80s Big Apple scene. It was recorded in the Jon Spencer-New York sessions with Clemens Graf Finck von Finckenstein on drums and Rainer Germann on Bass using analogue equipment from the 1950s and 60s..
Jesper Munk explains it as “the bittersweet conflict between traditional values and an unavoidable break away from conventionality.” Hints of Tarantino and Glamrock sounds are evident in “101 Proof” and “Reeperbahn”. Fans of the founder of Blues-Punk will be interested to know that Jon Spencer himself provides the stomping and clapping in best Slade/T Rex tradition for the song about Hamburg’s “Mile of Sin”. Randy Newman’s late night ballad “Guilty” brings back some light through a magnificent vocal performance, which together with accordion and Hammond organ has already become a highlight of Munk’s live set. As the title suggests, “Parched Well” brings sounds of echoes with reduced beats and a playful arrangement followed by another rise in tempo in the Blues-Rock smash “Smalltalk Gentlemen. After the folky tunes of “Cold Waters” the listener is taken back to New York by the more somber “It Takes Two” - and may well remain there for a while in a state of trance. Has all this really been achieved by a 22 year old Danish-German from Munich? You don’t have to be a clairvoyant to agree with the views of his producers, colleagues and the media, that Jesper Munk has a great international career ahead of him.