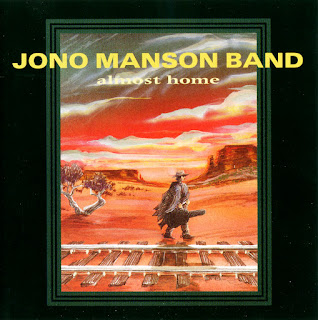 In December of 1995 Jono's album “Almost Home” was released on A&M Records. The project featured, among others, members of Blues Traveler, The Rolling Thunder Review, along with Warren Haynes on guitar. In the summers of 1995, 1996 and 1997, The Jono Manson Band, was a featured act on the national H.O.R.D.E tour alongside Sheryl Crow, Dave Mathews, Taj Mahal, Lenny Kravitz, Neil Young, Ziggy Marley, Wilco, and many others. When not on the road with his own band, or as the lead singer for “High Plains Drifter", he could (not surprisingly!) be found working the clubs in and around Santa Fe. In 1996, Jono's music was featured in the Farrelly Brothers' film "Kingpin", and in 1997 actor/director Kevin Costner called on Manson to write and produce music for his post-apocalyptic epic "The  Postman".