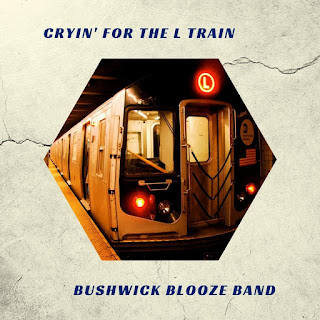 Bushwick Blooze Band's debut album released in 2019 with some great blues classics. Brother Dave on vocals guitar, with Chas Rio on bass and David Cornejo on drums.
Bushwick Blooze Band was formed in 2018 when Chas Rio (Brother Chas) decided it was time to (temporarily) stop trying to play jazz on upright bass and get serious about getting a rocking blues trio together. After one failed Craigslist attempt in pulling in a guitarist/bluesman he found Brother Dave, hidden away in Long Island, who had been perfecting his blues style over the decades and who was known for his screaming guitar solos. With the addition of David Cornejo (Brother David) - who brought his international musical training (from Peru via Barcelona) to the band - on the drums the band was up and running.

Cryin' for the L Train was recorded in the Spring of 2018 at Big Orange Sheep Studios in Industry City in Brooklyn, NY and represents Bushwick Blooze Band love for rockin' blues.
Recording Engineer: Daniel Alba
Mastering: Oscar Zambrano
Album Cover Art: photo courtesy of Bitch Cakes, album design by Wendy Chou
Thanks to many folks for their love and support including but not limited to Tim Ferguson, Bennett Miller, and Laura Kelly!