The Downtown Livewires - I'll Do It Today, But Not Right Now! 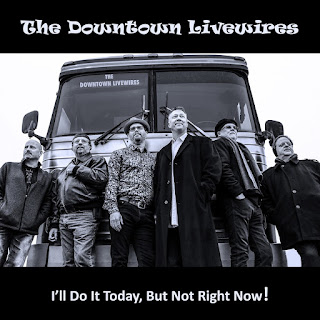 The Downtown Livewires is a 6-piece electric blues band that plays out of one of the fastest growing regions in the nation:  Northwest Arkansas (Bentonville / Fayetteville). The Downtown Livewires play high energy Electric Blues / Rock, Memphis blues, and legacy blues.  Audiences of their shows love to dance and sing along, no matter the venue, whether it be clubs, festivals, private parties, concerts, or city events.
Since the band’s first gig on Halloween 2011, fans have been treated to hundreds of engaging shows. The band’s first EP, “Live at Haxton Road Studios” was released October 2017. Recorded in front of a LIVE studio audience, it’s available on iTunes and the actual videos are on their YouTube channel. Electrifying fans with thrilling originals and the revitalization of old legacy high energy blues covers, The Downtown Livewires totally involve the audience in every show!
THE DOWNTOWN LIVEWIRES have been the "warm-up" band for both Country Platinum recording artist Collin Raye (4 Billboard #1 hits, and CMA Video of the Year), and The Reverend Horton Heat (national / international “cult” following).
The leader of the band is Roger Thomas from Bentonville, AR.  Roger was born and raised in Memphis, TN (South-Central, Oakhaven neighborhood) until he was 30, playing professionally there through his 20’s.  Roger is known for talking with the audiences or audience members with whom to have on-stage positive, funny conversations, sometimes jumping off the stage and playing, dancing and singing within the crowd.
Bob “Super Harp” Coleman is out of New Haven, Connecticut, and is a world-class harmonica player who also sings on lead vocals.  Bob has played with blues legends all over the country throughout his illustrious career.
Dan Doebele from Kansas City, MO is an absolute blues beast on lead electric guitar, is known by other professional musicians to be one of the elite guitarists in the nation, and plays slide guitar with ANYTHING handy!
Kurt “Where’s Kurt?” Haas is on keyboards and vocals from Tulsa, OK, and is known for his stellar new arrangements of old blues songs.  Kurt plays both piano and Hammond organ.
And the rhythm section of Mark Vanderhoof on drums and Johnny Smith on bass from Fayetteville, AR is one of the most tenured blues rhythm sections in the country, in which audience members often find themselves focusing on their musicianship and killer beats and fretboard runs.