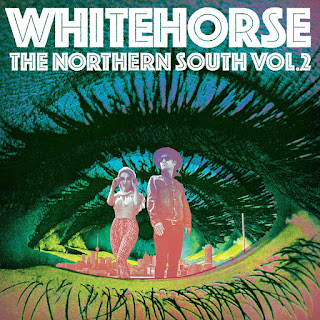 Skeptics might claim that a band that releases two sets of traditional cover songs in rapid succession is merely biding time while waiting for real inspiration to come. Granted, there’s a certain validity in that theory, especially given the fact that retreads of popular standards are decidedly in vogue these days. Thank you, Paul McCartney, Rod Stewart, Van Morrison and all the other elders of that age who figure that being of senior status is reason enough to ignore the generation gap completely. As a result, any attempt to return to one’s roots seems a valid artistic indulgence, especially since it serves as a reminder that creativity often evolves from unexpected origins.
Why then, should Canada’s Whitehorse, the Polaris Prize-nominated husband and wife team of Luke Doucet and Melissa McClelland, be any different? For one, they’re considerably younger than most of the artists that have gone this route. Secondly, they’re less known than the aforementioned artists that pursued that path. Happily then, this duo filters their intention through invention. Adept in both roots and rock, Doucet and McClelland are proficient enough to put their own spin on their selection. After all, they’ve done it not once, but twice, in the span of two successive releases.
Like its predecessor, Vol. 2 finds the pair offering an individual approach to archival blues and seminal soul, tapping arrangements that are consistently unexpected. Jimmy Reed’s “Baby, What You Want Me To do?” is considerably more subdued than the edgy approach that’s typically taken. Willie Dixon’s classic “I Just Wanna Make Love To You” is upbeat and effusive, practically breathless in its pent-up passion. They make that dark and dire Gospel song “John The Revelator” sound strangely seductive. Likewise, the timeless “St. James Infirmary” is so harsh and haunting, it effectively retools the song and takes it into an even deeper dimension. Released in the wake of their cheery holiday album A Whitehorse Winter Classic, The Northern South Vol. 2 offers further opportunity to fully explore Whitehorse’s diversity and dynamism. It’s anyone’s guess what they’ll do next.