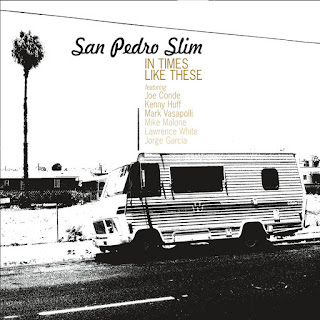 West Coast harpman and storyteller par excellence San Pedro Slim is back with his latest for Mojo King Records, this one entitled, “In Times Like These.”  It’s a set that’s guaranteed to help you get through today’s tough times, with a sometimes-biting, sometimes-humorous  look at folks livin’ day-to-day just to get by. Slim wrote all but one of the cuts herein, and he’s on harp and vocals, with Joe Conde on guitar, producer Kenny Huff on bass, Mark Vasapolli on drums, Mike Malone on keys, and the horn section of Lawrence White and Jorge Garcia. After a cool, gospel-radio station intro, Slim starts off with a swingin’ instrumental, “Down On Pacific,” as he busts out the big ol’ chromatic.  A cha-cha beat drives “Going To See Mr. Lee,” the man who’ll help you “leave your troubles behind” when you re-organize and “file a BK!”  Another tune about “workin’ hard for so little pay” is a sweet slow-groove titled “Low Pay Loser Blues,” with Joe’s twangy guitar and Mike’s acoustic piano adding to the “hard times” feel The horns get down to bidness on a cut written by Kenny Huff, the funk-filled strut of workin’ to keep a lover happy, “No Overtime.” We had two favorites, too.  Slim vows to “make next year better,” but, right now, it’s “Valentine’s Day At Motel 6,” set over a horn-driven, slow-dancin’-styled groove.  And, perhaps the set’s most humorous cut looks at the California jobless rate by way of a cool eight-bar, stop-time tale of “don’t call me unemployed–I’m Workin’ For The EDD!” San Pedro Slim writes about things he’s seen and stuff that permeates the daily news.  The country needs a stiff shot of good blues that’ll sho’ nuff make you feel better “In Times Like These.”  Until next time…Sheryl and Don Crow, The Nashville Blues Society.