Cathy Jean - In the Remains 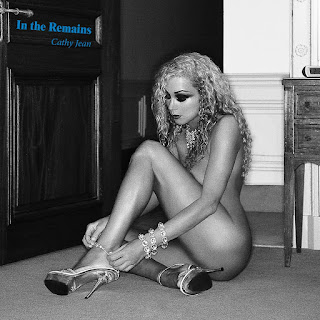 This one hit me like a rock. Cathy Jean is far from unknown to my ears so you would think that her confessional and confrontational rock chic -- and I mean that in the nicest way -- persona would have no more than a muted effect on me by now. However, and I should have suspected something given the striking cover art, she really let it rip this time with In the Remains being not so much an album as the sonic equivalent of a hand grenade. ... very focused and consistent. It is a rock album, of course, but Lita Ford wouldn't go anywhere near as far as Cathy Jean has here. The impact isn't the guitars or the drums. It is in her voice. Her words drip alternately with acid, love, pain, indifference and contempt in the way of a proper soul singer. She's telling it like it is and even a guy can get that this time around. In musical terms, there is nothing to complain about. The supporting players do a solid job of providing the foundation for the car crash sentimentality that Cathy Jean possesses with Keith Stafford's guitar easily justifying its place in the spotlight. Of course, if this were a relentless attack on the ears then a fair amount of impact would be lost so it is all the more noticeable that it is the subtler moments such as were found in King Civilian that work best. Having said that, there is something for everyone here as the good old fashioned r&b of You Shuffle proves. The important thing to remember though is that this is not a trivial album. It is hard work to shock anyone these days. Ask Lady Gaga if you don't believe me. Likewise, wearing your heart on your sleeve and reflecting on the pain inflicting inadequacies of your better half is hardly earth shattering. The difference here is the sincerity and you can take every word sung here as having been written in Cathy Jean's own blood. --5 carrots, Bluesbunny, Glasgow, U.K. --Bluesbunny, Glasgow, U.K.

With four CDs of Cathy Jean's in my collection, I've concluded she's one disturbed gal that does an incredible job of expressing it in her music. It often revolves around troubled relationships. She's somewhere between Lady Gaga, Ana Popovic, and Billie Holliday, if that's possible. Cathy Jean can play a mean guitar, have more lyrics in her songs than a novel, which tend to be pretty pointed and raw. What attracts me is the jazz influences intertwined with blues, funk, and rock. From her nude photos in the album sleeve and the high energy her music evokes, once you've been exposed to Cathy Jean, you won't forget her! Cathy Jean is one of the most innovative divas in the world of blues. --Bill Martin, Blues Society Of Tulsa, USA --Blues Society Of Tulsa, USA

... a touch of R&B and gospel in the vibe even though it's a rocker. This singer, who also wrote all of these songs, must have been a seamstress in a previous life. She ties all of these elements together well, even though they are huge in and of themselves... Words usually cannot capture fully what an artist's music truly sounds like. This is especially so in the case of Cathy Jean. She most definitely has a sound all her own, as a singer and songwriter. You'll have to buy the disc if you're tired of the same old blues rock that's been going around for the last decade or so. -- Bill Copeland Music News, Boston, New England, USA --Bill Copeland Music News, Boston, New England, USA