Roger Cotton - A Long Way Back 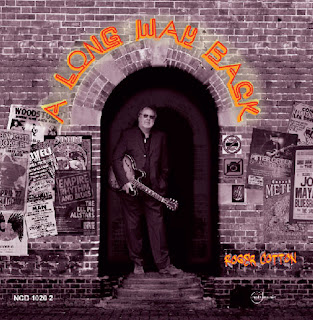 British blues owes a lot to this legendary man called Roger Cotton, producer, song writer, well known musician of huge talent and great sensitivity (those of you who listen to this tremendous fantastic record will immediately realize what I mean). iA Long Way Backi is the first one he has recorded under his own name and includes fifteen excellent own songs. Roger also plays keyboards and guitar along the whole cd, to back a bunch of high quality bright British musicians like Buddy Whittington, Papa George, Marcus Malone, Paul Cox, Val Cowell, Fay Hallam and Alan Glen.
For some years Roger Cotton was member of Peter Greenis Splinter Group and he also has played with John Mayall, B.B. King, Santana and Buddy Guy to only mention four great aces. As a studio musician (he is the owner of Roundel studios) he has been responsible of some Paul McCartney, Eric Bibb, Dr. Feelgood and Peter Green recordings. In short words, it is an ambitious magnificent work that will surprise listeners much more they have expected.
The CD also includes a bunch of great musicians that give the best of themselves along the whole album.
Roger Cotton is one of the unsung heroes of British music, he is a songwriter of note, and in his roll as producer and engineer at his studio he has been responsible for some memorable albums and performances.
"A Long Way Back”, is Rogers first solo album, on it Roger plays piano, Hammond organ and guitar and composed all the tunes, he also produced and engineered the project.
Roger for many years played with the Peter Green Splinter Group touring with artists like B B King, John Mayall's Blues breakers, Buddy Guy, Jimmy Ray Vaughan, Louisiana bluesman - Larry Garner, the late great James Carr and many more.  His latest tour has been with Buddy Whittington from the Blues breakers.
Roger is joined on this album by some top musicians from the USA - Buddy Whittington (John Mayall), Marcus Malone, from the UK Papa George, Val Cowell (Bad Influence), Paul Cox (John Slaughter), Alan Glen (Yardbirds, Barcodes), Derek Nash (Jools Holand), Nick Payn (Bill Whyman's - Rythm Kings), Gary Barnical (Phil Collins), Sid Gould (Incognito) just to name a few.
Top album from the best in the business...