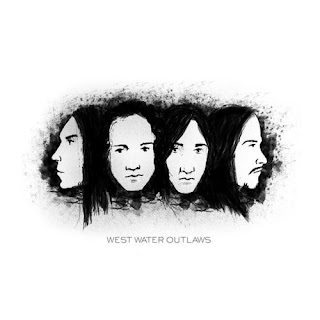 The high energy rock ‘n’ roll band West Water Outlaws from Boulder, Colorado was formed in early 2010 playing parties in the basement of singer Blake Rooker’s house. During the mass explosion of DJ software and macbook pros, not many parties in Boulder featured live rock bands. The rock parties were a hit and the band began playing in bars and local clubs for a small fee of beer and food. All four members have a strong foundation in blues/rock music which many listeners recognize as a classic sound but each and every one of those listeners can tell you something unique and innovative about The Outlaws. In the mind of the band, rock and roll is not a passed genre that they are attempting to revive, yet a continuous staple of music that challenges them to evolve their writing style and develop their own creativity. "We're just four guys playing instruments in the way that makes sense to us- the fact that it comes out rock and roll is completely separate." - Will Buck. Since then, the Colorado favorite has sold out the Fox Theatre multiple times, headlined the Boulder Theater and shared the stage with national acts such as The Meter Men, Royal Southern Brotherhood, Jerry Joseph, Wild Feathers, Rival Sons, ALO, Assembly of Dust, The Stone Foxes, Rose Hill Drive, Dirty Sweet, and Dick Dale. The West Water Outlaws rocked over 150 shows nationally before the end of 2013 with their EP entitled Real Killer (2012) while simultaneously writing their first full length album. The band has always had a very open and diplomatic writing dynamic with each member as important and expressive as the other. There is no set formula to their writing process as Blake Rooker explains, "Some songs are brought to the table nearly completed, some spontaneously combust in a jam, some take months of scrutiny and some just come to us in the studio."
February 4th, 2014 brings the release of their first full-length album. The 13-song album will feature all new material and showcase several different sides of the band, while giving you all of the reliable hard hitting rock that you're hoping for. With artistic interludes and some unusual instrumentation peppered throughout the album, you will get an idea of the band's quirky personality in an addition to their music. That is why the band has chosen a “self – titled” release as a way to introduce themselves to the world. Audiences and fans of Led Zeppelin, The Black Keys and Queens of the Stone Age will find the sound particularly captivating and refreshing. The West Water Outlaws look forward to touring nationally in support of the new album, bringing their new and distinct voice to the fans of a vintage rock ‘n’ roll sound.