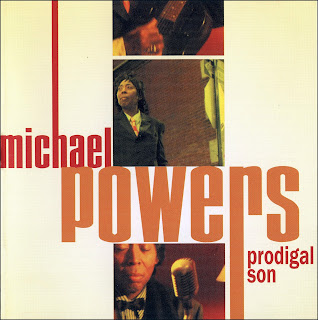 Michael Powers is a breath of fresh, blues air.
If outrageous blues guitar is your thing, if the electric Delta blues Jimi Hendrix played fires your soul - but if you also appreciate the humble tones of acoustic guitar - you need to check out Michael Powers. His first record, Onyx Root, was released in 2004 and received two Blues Music Award nominations, including contemporary blues album of the year.
Wow. And this 2006 follow-up? It, too, has two Blues Music Award nominations, also again, contemporary blues album of the Year.
Powers jumps into the blues rock fray with the classic rocker, “Goin’ Down.” Part Hendrix, part Led Zeppelin, Powers’ guitar explosion hammers home fusion. But believe me, Powers is no one- trick guitarist. On Sonny Boy Williamson’s “It’s A Bloody Life,” you have Powers on the Dobro drum brushes and an upright bass that sell the deep blues cries.
Powers’ second nomination is for “Prodigal Son” as song of the year. It has my vote. The song accurately tells what happens when a hard working son returns home and his family doesn’t recognize him because they are too high. A very different take on the well-known tale.
Powers’ delicately played guitar transforms the singer’s emotional pains. His expressive take on Bob Dylan’s “Every Grain of Sand” showcases Powers’ other instrument, his leathery vocals. Traditional blues fans should enjoy “Every Grain of Sand” - a tune that Muddy or Little Walter might have performed in the 1950s - as a change of pace from the Chicago blues shuffle.
There’s also Jimmy Reed’s “Oh John.” Reed is an important blues singer to Powers. When Powers was 12 and growing up in New Jersey, he would hear Reed perform at a tavern across the street from his family’s business.
In the 1960s, singer-songwriter Arthur Lee fronted Love, one of the most experimental bands from the West Coast. Powers’ cover of Lee’s dark toned classic, “Signed D.C.,” sets the perfect nostalgic mood of Love’s music, and of those Fillmore West, Electra Records days.
Powers and NYC’s Jimmy Vivino trade Dobro and acoustic guitar feelings on the poignant “Compassion.” Then they call in the country blues on Rev. Gary Davis’ “You Got To Go Down.” Powers returns to his over-the-top blues rock guitar on “Wild Side” and the Yardbirds’ classic “Train Kept A Rollin.”
In all, Powers, who was born in 1952, might well become one of the blues torch bearers in this new millennium. Take it from me, this is one of the most exciting blues guitar records of the year. Oh yeah, if you’re lucky enough to find one of Powers pre-releases of this record, you will find Jimi’s “Voodoo Chile” performed in a way you’d not expect, with Powers on Dobro and upright bass, and Vivino on mandolin.