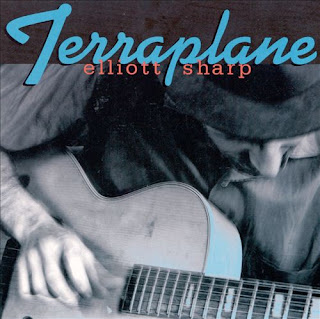 Who would have guessed that Elliott Sharp, that avant-garde, mad scientist, guitarist supreme, would play such soulful blues? On Terraplane, Sharp takes on 12 tracks either written or popularized by his blues idols, as well as four original compositions in similar styles. Ably accompanied by bassist David Hofstra and drummer Joseph Trump, he is nothing less than absolutely convincing here. Dispensing with the irony and impotent intellectualism that often hampers his other work, Sharp plays his guitar with verve and spirit. He showcases a good variety of tones and approaches to the instrument as well, showing that, without a doubt, he has done his homework. In addition to his conventional guitar playing, he also plays some mean lap steel, as capably demonstrated on "Sitting on Top of the World." Every once in a while, Sharp's avant-garde roots come to the forefront, but when they do, they remind the listener more of Jimi Hendrix' extremely progressive approach to the blues than anything else. The original compositions are quite good, with such memorable moments as the funky vamp of "'Sixty-Six" or the unusual turnaround of "Snowy Day." Sharp has never sounded this spontaneous and as in-control of his instrument. Fans of blues and blues guitar should do themselves a favor and pick this up, as they will no doubt be pleasantly surprised. Dirty, funky, and full of the genuine spirit of the blues, Terraplane, although an anomaly with regard to sound and approach, is one of the high points of Sharp's extensive catalog.