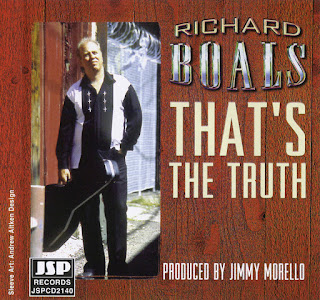 Known to his fans as the "blues guru," Richard Boals has helped to create the blues scene of the American Midwest. Having built his early reputation, between 1974 and 1995, as a sideman for a variety of show bands and country and blues groups, Boals solidified his standing as host of a Monday night jam session at the Dolphin Lounge in Gahanna, Ohio, from 1984 until 1995. Boals' love of music was sparked by the countless hours that he spent in the back of his father's restaurant, harmonizing with doo-wop records. Together with childhood friends Soni Yinger and Al Peterson, he played his first gig in the basement of a restaurant, at the age of eleven. He continued to play at parties and dances throughout his teens. Graduating from high school in June 1970, Boals enlisted in the U.S. Navy, serving until shortly after the conclusion of the Vietnam War, in January 1973. Within five days after his honorary discharge, he had secured a gig at a pool party and had formed a new band. He continued to be an active participant in the Midwest blues scene for more than two decades.
After a decade of balancing his music career with classes at Ohio State University, Boals earned a bachelor's degree in philosophy and moved to Denver, where he took a year long hiatus from music. Returning with an impressive album, Mystic City Mantras, which he recorded at the Musical Rec Studios in Columbus, OH, Boals spent five weeks touring the United States. He released a similarly power-driven album, Pieces From the Eclipse, in June 1998. Boals' musical direction went through a dramatic change when he recorded an all-acoustic album, On a Different Path, in July 1999. Forming a new band, Richard P. Boals and the Soals, featuring Al Peterson, Jack Miller, Cornbread Lyons, Steve Hill, Eddy Wilson, and Boals' wife Beth, he recorded Access Denied in October 1999, and That's the Truth the following year.