Bob Hart - Blue To The Bone 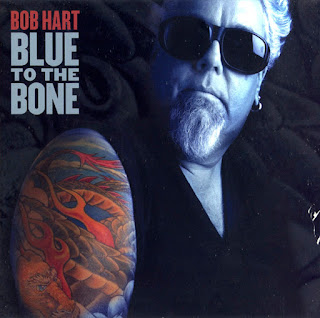 Sizzlin'stew of smokin'blues-kick ass rock-a taste of latin jazz & a flashback of 60's psychedelia.
Bob Hart’s singing and songwriting on his debut CD,”BLUE TO THE BONE” is much like the man himself-fresh, bold and powerful. It’s a smokin’ mix of bluesy, kick ass rock and roll with a taste of latin and even a flashback of 60’s psychedelia. Bob easily slides from one musical genre to the next. He’s as much at home wailing the gospel shouts of ‘HAVE YOU GOT MY BACK?” as he is on the psychedelic tinged view of an afterlife on “WHISPER”. Having lived all over the world as an ARMY brat its no wonder he draws on so many different influences. Going to high school in France and Germany he was introduced to the blues masters such as Howlin’ Wolf and Muddy Waters by English bands like the Stones. He first heard Bob Dylan’s “Like A Rolling Stone” in a French cafe juke box and bummed money from his dad to play it over and over. He even experienced The Beatles as a European teen did. He never experienced the Ed Sullivan hysteria although he enjoyed their music and harmonies. He grooved to Aretha and the 4 Tops, Temptations,The Miracles and Otis on the Armed Forces Radio network and listened to the Who, Jimi Hendrix, Traffic, Jefferson Airplane, Buffalo Springfield & The Yardbirds on Radio Luxemburg and Radio Caroline[pirate radio stations] in the wee hours.
He was born in Louisiana and returned to the South to begin playing professionally in 1970 basing out of Huntsville Alabama after wasting a year at UT [Knoxville] majoring in partying! It was at UT that Bob first heard the ALLMAN BROTHERS BAND and like millions of others around the world they became a huge infuence. Playing took him all over the country mostly in the South. Over the next few years bands he was in opened up for The Marshall Tucker Band, Brownsville Station. Bachman Turner Overdrive, Golden Earring,Wet Willie, Head East and The Atlanta Rhythm Section. Moving to Nashville Bob formed Buckeye with longtime friend and bandmate Mike Smoot[bass] and Tommy Crain[guitar, later of CDB fame]) Buckeye opened up the first 2 of Charlie Daniels’ Volunteer Jams.They were the only group to open the Jams- over the next 20+ years Charlie's band came out first and was joined by their guests. He began recording in Muscle Shoals with Pete Carr, guitarist for the legendary Muscle Shoals Rhythm Section. The bonus cut on the CD was recorded in the late 70’s at Broadway Sound Studio- on the same floor where Percy Sledge crooned “WHEN A MAN LOVES A WOMAN” This previously unreleased gem, “ANOTHER LONELY NIGHT” was included as a memorial tribute to ace guitarist and former bandmate, the late Ray Brand. It features the band Buckeye with the Muscle Shoals Horns and a searing signature solo by Ray. The cut is as hot today as when it was laid down in ’78.
Whether it the straight ahead rock grooves of “Take the Money and Run” & “Choose the Blues” or the southern rock slinky slide work on “ASSTIFIED” Bob and his merry band of monster pickers (JOHNNY GARCIA-JOHNNY NEEL –NIOSHI JACKSON & MIKE SMOOT] make it all work. From the latin rock flavor of ‘LOVIN YOU IS ALL MY HEART CAN DO” they take a side trip on the funky side with the horn filled “LISTEN TO YOUR HEART” a nod towards two of Bob’s favorite influences- Paul Butterfield's Better Days and Little Feat.
In the end, BLUE TO THE BONE is NOT a blues record although the title cut and “THE WAY YOU LOVE THE NIGHT” are excellent examples of the bluesy side of this multifaceted singer/songwriter. It sounds like it will be impossible to pin Bob down to one musical genre and that’s a good thing. This CD ROCKS -IT ROLLS –IT DANCES !
It harkens back to the days when making a record was more about capturing what the artist was doing and feeling at the time and less about what bag marketers could stick him in. Dick Clark and his Bandstand kids would love it because regardless of the style all the tunes on this record have the “dance” running throughout. Pick up a copy of ‘BLUE TO THE BONE” & wrap your ears around it. Then go catch him live. Trust me -you won’t be disappointed.