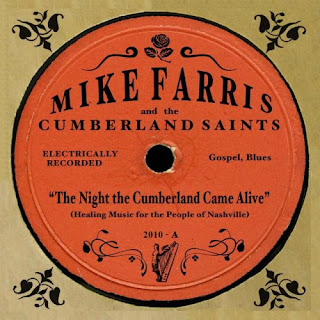 Americana/Gospel artist Mike Farris announces the eOne Entertainment release of Mike Farris and the Cumberland Saints' The Night The Cumberland Came Alive. Available October 26, this six-song EP commemorates and celebrates the rebirth of Nashville, a city and its surrounding communities that were affected by the floods that hit middle Tennessee in May. The project was recorded just weeks after the flood, as the people of middle Tennessee regained their civic pride and quickly rallied to help their neighbors and rebuild. The Night The Cumberland Came Alive features an all-star cast of musicians including: Sam Bush, Kenny Vaughan (Marty Stuart), Gill Landry (Old Crow Medicine Show), Byron House (Robert Plant), as well as Ann, Regina and Alfreda McCrary (The McCrary Sisters), Derrek Phillips and Eric Holt from Farris’ own Roseland Rhythm Revue. “Deeply rooted in Gospel, soul and blues traditions, Mike's performances are an awesome 'lift your hands up, stomp your feet, give it your all' tent-revival experience like I’ve never seen," states Bob Morrison, VP of Christian Music at eOne. "We’re so excited to be part of Mike’s journey, and he gives so much through his music and at the same time gives back to his community, which makes the journey together so much more rewarding.”
The Night The Cumberland Came Alive is the first of Farris’ Rose Memorial Fund projects, which is an ongoing charitable outreach in memory of his long-time manager and friend, Rose McGathy. Farris rolls out a decidedly pre-war Americana sound, while delivering a hopeful message of restoration.
“Stylistically, pre-war American music has long been a passion of mine,” Farris says of the project. “Before the flood, we’d been searching for songs that would evoke the struggle and the victory of the working class, a sound rising up out of flesh and bone, of spit and spirit. But then, as a city, we were hit square in the gut by this unbelievable flood. And that sound meshed with the spirit of resurrection we saw rise up all over this area. When we gathered in that historic church to lay it all down, what happened was beyond our imaginations.”
The title track’s lyrics deal directly with the flood and Farris, along with Ketch Secor, penned “Dear Lazarus” just days before the recording. According to Farris, “Playing these songs—sight unseen, without so much as a lead sheet—and with such a dream team of musicians was the thrill of a lifetime. You can hear the passion. You can feel the love in the room. And I’m thrilled to release it to help this community get back on its feet.”
This release comes hot off the heels of Farris’ recent GMA Dove Award for Best Traditional Gospel album of the year for 2009’s SHOUT! Live, a sweat-drenched document of his Sunday Night Shout residency dates at Nashville's legendary Station Inn. The Night The Cumberland Came Alive is also a continuation of the musical and spiritual journey that Farris began with his 2007 release, Salvation In Lights, which contributed to him receiving the 2008 Americana Music Association’s New & Emerging Artist of the Year award.
A portion of the proceeds from the sale of The Night The Cumberland Came Alive will benefit Nashville's Downtown Presbyterian Church’s ministry for the homeless. This is quite fitting as the EP was recorded in less than a day at that historic building. Mike Farris plans on performing select dates to showcase the material on the EP, in addition to performing monthly with The Roseland Rhythm Revue as part of his Sunday Night Shout residency this fall at the Station Inn.