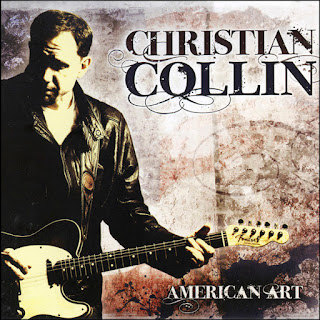 The first time I heard singer-songwriter Christian Collin, I had the privilege to review an album of his back when I wrote for Big City Rhythm & Blues.  As I recall he had been with a band called Molasses but had recently gone solo with his own brand of no-holes-barred electric blues.  It was majestic and contained all the power and glory you want with first class blues rock.  But there was more to it as well.  This must have been at least 10 years ago.  The first time I saw him perform was at a special blues event about five years ago.  His performance was far and away the best of the evening.  Because it was a blues event, Christian pretty much stuck to the blues, but he has much more in his arsenal as well. I sensed he might have been holding back a bit.
I could not help but hear in his work a certain affinity for the work of the great Johnny Winter.  Since then Collin has branched out into more of a full bore American Music experience, not just the blues.  His new release, American Art, is a real achievement that illustrates the point that this music is still alive and well–and growing.  In 11 new tracks of original music, Christian Collin shows himself to be a major force to be reckoned with.  His time has come.
Americana, American Music, he’s earned the right to be well within in that tradition.  But I like to call it rock ‘n’ roll.  If that term works for acts as varied as the Grateful Dead, Bob Dylan, Government Mule, Johny Winter And, and Robin Trower, just to scratch the surface, I’ll include Christian Collin in that same pantheon. Track 3, “Call Me,” is a case and point.  Short and sweet, it has all the character of a Chuck Berry tune from his hey day, complete with a Berry-inspired classic guitar break.  But the next track, “Satisfaction Guaranteed,” is pure funk with all the brass that style of music requires.  Think gritty tenor sax, trumpet and alto sax, and solid charts with room for full expression.  It has the tightness of James Brown and the broad appeal of, lets say, the Average White Band or Tower of Power.
There’s a traveling wander lust to many of the tunes.  Track 10, “Way Past Midnight” rocks with a quieter and more contemplative sensibility to it that is not unlike an up-tempo Eric Clapton ballad.  The final track, “The Fire Still Burns,” has a traditional piano playful quaintness to it, that belies the depth of the lyrics.  This is no moon in June music.  It’s filled with the self-reflection you get with a mature artist.  Collin is around 40 and has enough experience under his belt to create 11 meaningful songs. You even get all the lyrics contained in a elegant package with immaculate artwork.  What you get is big life issues, a full heart, and great singing and guitar playing, without a shred of the didactic to weigh it down. It is all universal stuff that will appeal to anybody with discriminating taste who refuses to settle for the ordinary. — George Seedorff