Guitar Gabriel & The Brothers in the Kitchen - Toot Blues 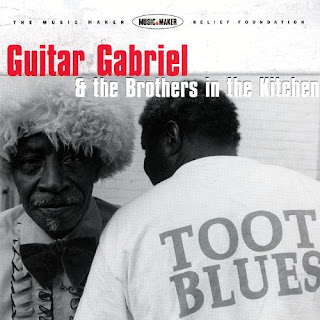 One thing that serious blues collectors absolutely love is obscurity; they love to find a recording by an obscure, little-known bluesman and tell other blues collectors about it. There is nothing wrong with looking for recordings by obscure bluesmen as long as they are good, solid recordings, and Toot Blues is a good, solid recording. Guitar Gabriel (b. Oct. 12, 1925, d. April 2, 1996) was not a major name in the blues world; it is quite possible to be a serious blues historian and not know who he was. But one person who was hip to Gabriel was producer/guitarist Timothy Duffy, who produced this recording in Winston-Salem, NC, in 1991; Gabriel died five years later in 1996. This enjoyable 38-minute CD has no problem capturing the raw, rugged, bare-bones spirit of Southern country blues. With Gabriel on lead vocals and acoustic guitar, Duffy on guitar, and their colleague Captain Luke providing some additional vocals, Toot Blues thrives on intimacy -- and the expressive Gabriel tends to favor the Piedmont blues style. He also favors a blend of blues and gospel at times; although most of the material is secular, Gabriel includes a few Christian songs (including the standard "Amazing Grace"). On the religious tracks, he brings to mind the late Rev. Gary Davis -- an acoustic country blues legend and South Carolina native who was famous for combining blues and gospel. Toot Blues is well worth obtaining if one is a fan of acoustic Southern country blues, and Duffy should be applauded for having the good taste to document Guitar Gabriel while he still had the chance.