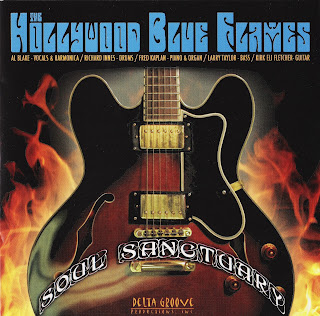 A tasteful and intelligent modern blues band, the Hollywood Flames came together in 1975 on the West Coast as the Hollywood Fats Band, led by guitar phenom Michael “Hollywood Fats” Mann and featuring Larry Taylor on bass and drums, Richard Innes on piano and Hammond B-3, Fred Kaplan on piano and guitar, and harmonica whiz Al Blake. The group specialized in a kind of informed update of the classic electric blues bands of the 1950s, keeping the tradition alive while giving it a push forward at the same time. Mann’s death in 1986 brought the band to a close until 2005 when the original members reunited as the Hollywood Blue Flames, this time with guitarist Kirk Fletcher aboard, and continued making vital blues music in the same vein as the original group. A debut album under the Hollywood Blue Flames name, Soul Sanctuary, appeared in 2005 from Delta Groove, followed by Road to Rio in 2006 and Deep in America in 2010. ~ Steve Leggett