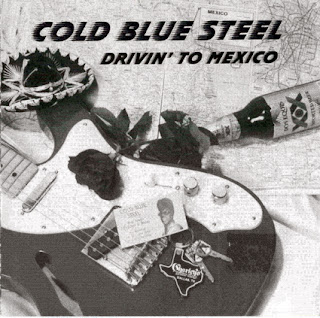 Blues, Rockabilly, and Good Ol' Rock and Roll. Texas Style.
Texas in the '50s... When a car was the only way to go places and gasoline was 14 cents a gallon. This was the reason interstate highways were designed. This was the land of Chevys, Buicks, Harley-Davidson motorcycles and rest stops. This was the land of roadhouse boogie.
Dallas' Cold Blue Steel plays music that sounds like it was written in roadhouses up and down the Texas countryside. A white-hot blend of blues, boogie, shuffle and electricity, its cool musical touch can scorch the ears off its listeners.
Dressed in their rockabilly/Texas blues drag, the band started in 1986 opening shows for such blues legends as John Lee Hooker, Man "Guitar" Murphy, and Grammy Award-winner, Clarence "Gatemouth" Brown. Chosen 'Best Overall Act" in the 1993 Buddy Magazine Year End issue, Cold Blue Steel was featured at the State Fair of Texas for the last four years opening for Bruce Hornsby, 38 Special, Webb Wilder and the Iguanas. They have toured with X-Beatle Ringo Starr, Bo Diddley, Delbert Mcclinton and many others.
Two-time Dallas Observer Music Award-winners for "Best Blues Band", Cold Blue Steel performs a variety of classic American tunes with incomparable enthusiasm, showmanship and authenticity. Their song list includes Stax and Motown soul favorites of the early '60s, Elvis and Memphis rockabilly, tunes from many Texas blues artists (Freddie King, Albert Collins, T-Bone Walker and the Fabulous Thunderbirds), swing compositions, and finishing oft with some classic country and western and '50s rock and roll.
CBS is still enjoying the success of their second hit CD, "Headed Out Of Memphis" which is being re-released on TopCat Records. It was originally released in 1996 on Icehouse/Priority Records. The CD is being played on over 100 radio stations nationwide as well receiving international airplay in several European countries. It has also gotten favorable reviews in a number of prominent national music magazines such as Blues Review and The Album Network Several well-known Texas musicians are featured on the new CD, including Grammy Award-winning keyboardist Tim Alexander from Asleep at the Wheel and national recording artist Reverend Horton Heat.
Their first CD, "Drivin' To Mexico" was the largest independent selling blues release in Texas history. Both the CD and cassette versions are in sixth pressings and requests for live appearances are at an all-time high.