Doug Prescott Band - Blues In The Key Of Sea 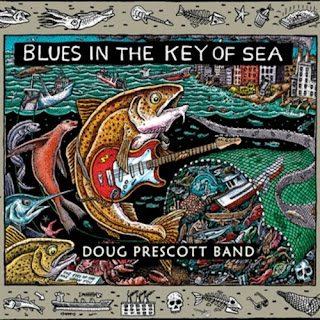 A truly eclectic mix of blues, rock, R&B, reggae, bluegrass a la Little Feat, Delbert McClinton, Allman Bros, Dire Straits/
Doug has been crafting his songwriting skills since the late 60’s. Many bands and recordings later, 2011 saw the release of his 2nd solo effort, The Journey & The Deep Blue Sea. This release has met with widespread critical acclaim and is getting airplay throughout the U.S. and Internationally. Doug was able to bring together a diverse and highly skilled group of musicians and singers for this release, from Craig Fuller on background vocals (Pure Prairie League, Little Feat) to Will McFarlane on guitar (Bonnie Raitt), and from Martin Parker on drums (Vince Gill, Don Williams and many more) and Allyn Love on pedal steel guitar (Steve Wariner, Patty Lovelace and others) to Tony Bowman on keys (Edgar Winter) and engineering/co-production. The 10 songs on this release are all over the map stylistically, yet form a cohesive Blues/Alt-Country/Americana blend, with truth and the heart at the core. One of the common threads throughout Doug’s recordings have been his musical connection with Tommy Hartley, a guitar virtuoso who permeates the music.