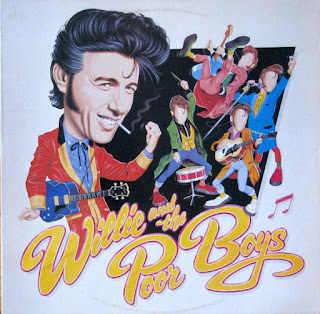 Willie and the Poor Boys is the eponymous debut studio album of British blues rock band Willie and the Poor Boys. The album was recorded within two weeks in November 1984, and one week in early January 1985 at the Sol, Cookham, Berkshire, and released on Decca Records on 25 April 1985 in the United Kingdom, and Passport Records on 22 April 1985, in the United States.
In September 1984, Bill Wyman conceived an idea to record a charity album, and by November had assembled a group of well-known musicians to record an album to help the Ronnie Lane Appeal for ARMS. The original working title for the album was Up in Arms, a play on the ARMS theme. The album was eventually named after the band Willie and the Poor Boys and the line up on the album featured Bill Wyman (bass), Charlie Watts (drums), Kenney Jones (drums), Jimmy Page (guitar), Paul Rodgers (vocals), Chris Rea (vocals), Andy Fairweather-Low (guitar), Geraint Watkins (keyboards), Mickey Gee (guitar), and Henry Spinetti (drums). The songs on this album encompassed vintage American blues, R & B, swing, and rock and roll material. In addition to the recording, a number of outtakes from the album in John Lee Hooker's 'I'm Mad' and Willie Dixon's 'Down in the Bottom' are known to exist, and were played during a Bill Wyman interview on American radio station KBFH in May 1984, but neither of these recordings have surface yet on any album.  During the recording of this album Wyman and Watts also contributed to the Howlin' Wolf album All Night Boogie at Olympic Studios, and Page and Rodgers were recording their first album and in rehearsals for their tour as the Firm.
Willie and the Poor Boys was released on vinyl LP, cassette, and standard single CD. The CD was reissued on Ripple Records in 1994.