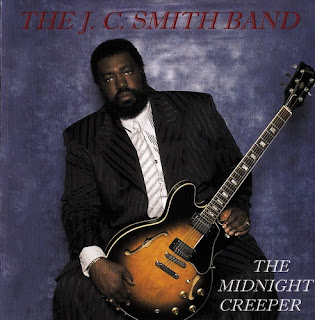 J. C. Smith,winner of the 2012 Metro Newspapers Best Of Silicon Valley “Best Original/local Band”, and 2006 Bay Area Blues Society West Coast Blues Band of the Year award winner is originally from the San Francisco Bay Area. He is an outstanding performer noted for his energy and charisma. Prior to playing guitar, he was the drummer for the Back to Back Blues Band. In 2000, he emerged from behind his drums, armed with a Gibson 335. J. C. attacks the Blues as if he is being guided by the masters like T-Bone Walker, Albert King, and Johnnie Guitar Watson.
It features a host of Chicago players including Willie “Big Eyes” Smith, who worked with the Muddy Waters Band for twenty years. 2001 marked the release of Smith’s first effort “Midnight Creeper” which brought him international attention. Smith has toured throughout the United States, Eastern Europe, Mexico,South America,and Russia,to sell out crowds. Smith has work with and shared the stage with notable artist such as Hubert Sumlin, B,B, King, Buddy Guy, Buddy Miles, Son Seals Willie Bigeyes Smith, Pinetop Perkins and many more. He is also known as radio personality Johnnie Cozmik on KKUP F.M. J. C. feels that his goal in life is “To keep the Blues alive and take the message to the people.”