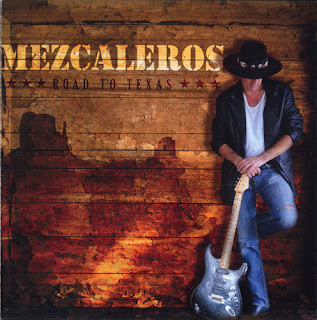 This project has been launched a few month ago by a guitar player, passionated by Blues and Southern Rock named Philippe Marseille AKA Phil Mezcal, a French guy from the south (yank !) of France, he used to go really often to the United States and particularly in the Deep south...
He's really habited by the music, the culture and the spirit of those regions and he decided as many amateurs to create his own music by his own way in a home-studio...
Phil decided, without great conviction, to put his music on-line, but things went really fast from this time with the help of a collaborative site which allows the artists to collect funds from the users to finance the fees of the recording and the promotion of an album...
This money allowed him to book for recording sessions at studio Tone House in Paris (the one from Joe Dauptain and Jean-Etienne Loose who are really good sound engineers) to prepare the future CD that should be soon available on main platforms like iTunes, Amazon, Fnac.fr, Virgin Megastore…
A sound looking like Blackfoot at their greatest period (with Rickey Medlocke and Jakson Spires) or ZZTop on "Waiting For The Bus/Jesus Just Left Chicago", a REAL DELIGHT !
For me, one of the greatest songs of this album is "Let It Down"...or..."Cajun river"...
The artwork of this CD will also be created by a pro, Stephane Martinez !
The CD had been mastered at UNIVERSAL Studios in Paris.
To perform the recording sessions, he needed a band, because it shouldn't have been possible, would have been too expensive and too long to do all this alone, that's why he hired a Blues/Rock drummer and also a bassist, but once all the titles had been published on Reverbnation the reached a really immense success and a lot of US musicians applied with him to be part of the band...
A lot of concerts opportunities in the US and Europe are also on their way...
The official releasing of the CD is planned for November 2011 and the promotional tour will occur in 2012 when the band will have been officially structured and when the will have had the time for the rehearsals to ensure the shows will be at least at an equal level as the CD and even better !
Rebel Spirit and an incredible musical quality are anyway the signature of Mezcaleros, and I suggest you to connect to Reverbnation to listen to all the tracks of this forthcoming album, and also to share this article with whoever are interested by this kind of music
We are awaiting firmly the release date of this CD, this is a certitude !