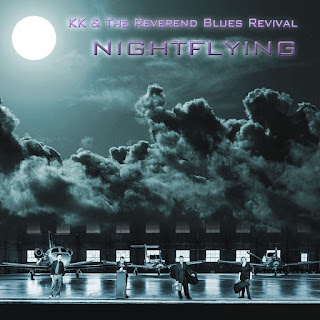 The Reverend Blues Revival -
The Reverend  David Ashcroft has long had a dream of a Blues Revival to inspire and move souls through music. “Preaching the blues…” He says. “Hands in the air spirit walking blues…”. David spent 17yrs as pastor/preacher. “…peace, love and FREEDOM!!!” He belts out in cadence… Moving the spirit so the body has GOT to groove, is the magic of these performances. This passion for the blue notes is what drove and developed The Reverend and his Blues Revival. While performing with ElectroGroov Band he reconnected with the amazing Kathy Kidd.
Kathy Kidd has been singing her goose bump raising full tones and pure notes since early childhood in school, church and socially. She was gigging around Fayetteville in the early 80’s when the late Rick Lancaster took her under wing. By the end of the 80’s Kathy was down in New Orleans, LA studying guitar with Marti Jacobs who is a Guitar Institute of Technology bass player. Jacobs taught guitar chops but showed the bass line as well. Kathy found the bass lines were her home. While in New Orleans studying she was also performing with various artists including Sidney Snow. When her mother fell ill, Kathy moved back to Northwest Arkansas and there met Steve Glasspool. As a renowned bass player from Beaumont, TX, Glasspool continued to teach her bass and they performed as a duo around Beaumont for several years. Kathy moved to Hot Springs and has played in the band ElectroGroov for a couple years in the Hot Springs Area and beyond. The Blues is Kathy’s true home. The inception of  KK & The Reverend Blues Revival was inevitable! The music they both play and love is the Blues. Each one knew they would be working on this project together. It was simply a matter of when…
The Reverend David Ashcroft moves your soul through his keyboard expressions and well-trained vocal contributions. The Rev’s earliest influence was his uncle Alvin Maloch who was a 1940s/50s professional jazz pianist. David’s mother shared the big band and orchestra music she loved and his big brother planted the roots that brought him to the Blues. At 11 he began to take classical piano. School choir and voice training were going on while studying harmonica. In his early 20’s David worked for Capital Keyboards demonstrating organs throughout the state. This is where he met Dale Rich. Dale was a retired jazz Hammond Organ player and concert organist for the Lowrey Organ Company. Mr. Rich embraced and mentored David in jazz and blues organ. Variety is the spice of life they say and this musician embraced the philosophy. David was involved with groups that did full acoustic (Acoustic Fusion), all originals (Tri-Chord), as well as old Rhythm & Blues (Urban City Band). Later he played piano, organ and harmonica with Steve Hester and DeJaa Vodoo who graced the stage at Miglewood Hall in Memphis, TN; House of Blues in Dallas, TX and Juanita’s in Little Rock, AR. This group opened for the likes of Samantha Fish, Eric Gale, Lynard Skynard and Johnny Winter. Supporting Blues in Arkansas is a passion for David. In January of 2018 David performed with guitarist Kenny Mann and the band Cheap Thrills at the 2018 IBC in Memphis.
Kenny Mann’s high energy and excitement are evident as both lead guitar and vocalist. Kenny’s parents gave him a pivotal gift when he was 12 years old. It was a Blues Series guitar and he hasn’t been without a guitar since. He joined the first band (Hair Metal) at barely 15 and by 18 had found the Blues. In 2001 the Guitar Alliance website (on-line guitar lessons) was launched as a way to blend his internet marketing experience with a love for guitar. As the lead singer and guitarist for Spinning Jenny he spent several years playing all across the southern US. Kenny’s voice makes the listener feel every emotion and want to hear more. The blues is a natural home for this talented musician. This was evident when he performed with Cheap Thrills representing the Arkansas River Blues Society at the International Blues Challenge in Memphis, TN. Kenny and The Rev certainly represented with this band for Arkansas during their two performances at Hard Rock Cafe on Beale Street.  Kenny continued as lead vocals/guitar for Adult Summer Camp 2018. Kenny was the front man for the band Cheap Thrills when they played the Historic Arlington Hotel nearly exclusively through the Summer of 2018.
These three decided it was time. With Kenny, Kathy and The Rev….KK & The Reverend Blues Revival had begun!