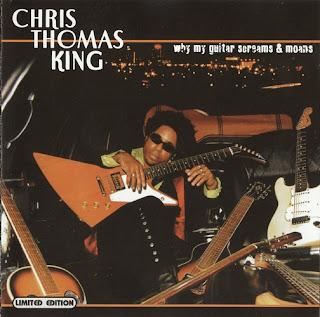 Chris Thomas King is a multifaceted guy. Aside from being an actor (he played Lowell Fulson in the Ray Charles biopic Ray and also appeared in O Brother, Where Art Thou?), he produced, arranged, engineered, sang all the vocals, played all the instruments (except for the horns), and wrote all but one of the tracks on Why My Guitar Screams & Moans, then released it on his own 21st Century Blues label. The result is an impressive contemporary album that is less blues than blues-informed, and it exhibits a wide range of styles while remaining inclusive and cohesive. Although there are some fairly straight-ahead blues cuts here ("King Snake," "Juke Joint Lover," "Wicked"), King's vision takes the blues as the foundation of contemporary pop music rather than a destination point, which means there is as much R&B, funk, and urban soul in these tracks as there is blues. The opener, "Starr," and the closer, the viciously anticrack song "Cracked," bear some resemblance to the great urban commentaries of Curtis Mayfield, while King dials up the funk for an honorable cover of Prince's "Kiss," then goes neo-soul for "Come Home Tonight." Tying everything together, and making this album feel unified in spite of the different styles, is King's blazing electric guitar, which snakes and cuts through these tracks with a bone-rattling tone. Most contemporary blues players use the blues as a way to connect with the past, while King (much like Otis Taylor) uses the form as a fulcrum to vault into the 21st century, which explains why his guitar lines scream and moan more than they gently weep.