Mark DuFresne Band ( featuring Billy Stapleton) - Have Another Round 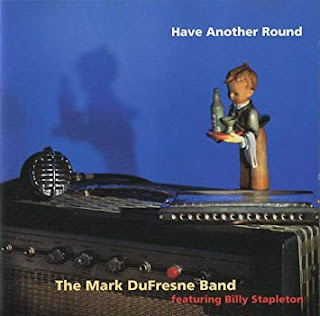 One of Washington Blues Societies most awarded hamonica and vocalists releases his much awaited, second CD. A Hohner endorsed harmonica player with a three plus octave range. With Billy's slide guitar playing, and a tight rhythm section, these all original tunes are unforgettable. BAND_MEMBERS: Mark DuFresne - harmonica Billy Stapleton - guitar Alan Isaacson - drums Kelly Leifer - bass
Mark DuFresne is one of the most sought after Blues talents in the Northwest.  The Washington Blues Society has awarded him for best vocalist, songwriter and harmonica more than any other artist.
He has recorded three CD’s of all original music.  “Out of That Bed”,  “Have Another Round” and “There’s A Song In There”, which featured the lineup of the former Hollywood Fats Band.
In 2002 Mark joined the coveted band “Roomful of Blues” as lead vocalist.  While in that role the band received a Grammy nomination for “That’s Right”.  They also won the W.C. Handy award for Best Band - 2004.  The New England Blues monthly awarded him Best Blues Vocalist.  He returned home to the Pacific Northwest in 2006 after a very successful and fun four and a half years.
Recently he has had the pleasure to tour in Europe with  Italy’s finest...  Maurizio Pugno, guitar, Alberto Marsico, organ and bass, and Gio Rossi..  excellent musicians..  excellent pasta.....
His work on the chromatic harmonica is considered as some of the most innovative in Blues music.  His ability to circular breathe has left audiences amazed.
“DuFresne is as distinctive as a vocalist as he is a fiery player;  rather than recycling old riffs, his original compositions are tuneful, melodic and grooveworthy..” - Blues Review Magazine....

Have Another Round
Автор: errny на 16:24