Tommy Grills - The Hard Side Of The Blues 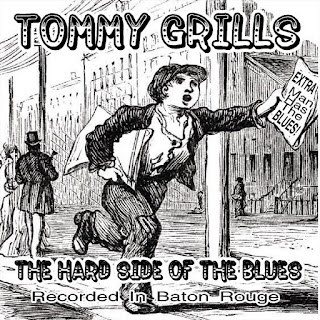 Chicago blues meets Baton Rouge blues in this first effort by Blues Master Guitarist Tommy Grills produced by Kenny Neal Tommy “Bluz” Grills grew up in the Rochester, NY, area exposed to some of the top Jazz, Blues and Folk Artists while working at his father’s nightclub “The Nugget” during the late 60s to early 70s. Greats like Miles Davis, John Hammond, Freddie King, Harry Chapin, John Prine, Steve Goodman,Bobby Whitlock and many more played there. While they were all huge influencers on Tommy, it was the BB King crossover classic “The Thrill Is Gone” that sealed his love of Blues. As he says, “It was the vocal-like quality of BB’s guitar – he could make it cry.” Tommy met and played with James Cotton’s band in 1977. He was offered a spot in the band but had to decline at that time for personal reasons. Around the same time period, Tommy met and played with Robert JR Lockwood and met Albert Collins . Those three were his biggest influencers. Shortly after, during the late 70s, he formed his first Blues Band, playing inner city bars and local venues around the Rochester area. In 1982, Tommy played two shows with Albert King. Following that, he reconnected with James Cotton and toured with him throughout the Northeast and Canada until James had to stop touring due to health reasons. In 1993, Tommy moved to Phoenix and formed another Blues Band, the Tommy Grills Band. He immediately entered them into the Phoenix Blues Showdown. There were over 15 local bands entered in that competition and even though they had not yet played a formal gig, Tommy’s band won first place and was sent to Memphis to participate in the Blues Competition. That would be the first of four times Tommy has won that honor, each time with a different band.In 1999, when AZ singing legend Big Pete Pearson came out of retirement and moved back to Phoenix from Maine, he called on Tommy to join his band. They had many years of pleasure working together and in 2001, recorded the CD “One More Drink” on Blue Witch Records. During his time with Big Pete, he played with many of the Blues greats such as Nappy Brown (at his last Rhythm Room appearance), Joe Houston, Harmonica Fats, Bernie Pearl,Tom also opened shows for Duke Robillard, James Cotton, Savoy Brown, Robert Cray, Albert King, Matt “Guitar” Murphy, tom has also done shows with Joe Beard, Raful and son Kenny Neal. AZ Artists Tommy has performed with include Big Pete Pearson, Chico Chism, Chief Schabuttie Gilliame, Tommy Dukes. This recording fills a dream of recording in Baton Rouge with the Neal Brothers Gralin,Darnell, Red and Kenny Neal. Tom had met and played with Noel Neal in the James Cotton Big Band and thru him met and played with the Patriarch of the family Raful Neal. I would like to personally thank Kenny Neal for his guidance and harp playing during the sessions at Brookstown Studios Baton Rouge.

The Hard Side Of The Blues