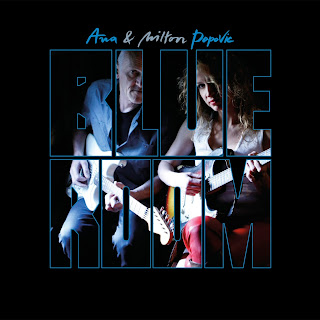 Highly regarded blues powerhouse Ana Popovic has recorded Blue Room with Milton Popovic, her father.  Produced by Jim Gaines (Luther Alison, Neville Brothers, Eric Gales, Albert Collins, George Thorogood, John Lee Hooker, Stevie Ray Vaughan) the album is out May 19 from artisteXclusive Records, distributed in North America by City Hall.  Blue Room is a musical document of Ana’s warm and continuing relationship with her dad, the man who inspired her to take up the blues, and music in general, as her professional career path.
The family’s apartment in Belgrade was unlike other Serbian homes when Ana was growing up.  It was within that 11th floor flat that an enclave called the “blue room” was the place where blues and rock albums were played and discussed and music was pursued. It was where  a father inspired his daughter to take up the guitar and to unlock the blues feeling within her.  Ana, widely recognized as a brilliant guitarist and the only woman to participate in the most recent edition of the all star Experience Hendrix Tour, says her father "really made me love the instrument.”
While Milton — a photographer and printing technician by trade — never pursued a career in music for himself he, too, was taken at an early age by the power and majesty of the blues. “In the beginning the blues grabbed me with feelings expressed by artists like Arthur Big Boy Crudup, George Smith, Magic Sam, Sunnyland Slim and Lightnin’ Hopkins” he says.  Milton, in fact, taught himself English by translating song lyrics, word by word, to gain a better understanding of the music.  “As much as we enjoyed blues, we loved great songwriters. Blue Room is simply a mix of both,” he explains.  The result is an ecumenical tracklisting that includes songs written by Jimmy Reed, Sonny Terry & Brownie McGhee as well as John Lennon and Van Morrison, among others.
Ana’s career has taken her from Belgrade to Amsterdam where she started a family and, currently, to Memphis. It was not easy for her to convince her father to fulfill her dream of recording with him and suggests that while it appears that the album is something of a tribute to her dad, she candidly calls it as “a gift to myself and to my children."
Her father traveled from Europe for the sessions that took place late last year and earlier this year in Stationville TN and Memphis. “It was hard for me to get him in the studio but I asked him to choose a rhythm section and a producer from among all the people I've worked with in the past. He came back with a short list and then we spent a week together laying down the basic tracks, recording vocals and guitars. Most of the solos are recorded live with the band. It was incredible to see him being so comfortable and leading the band and this is a guy who had never worked with a drummer.  The band backing Ana and Milton on the album is Rick Steff (keyboards), Harold Smith (rhythm guitar), Dave Smith (bass) and Steve Potts (drums).
Ana has often thought of the critical role her father played in her musical life and was bound and determined to create some kind of permanent document of that fact, noting, “There’s really not one time when I’m on stage that I don’t think of him and what he did for me.  I’m up there playing, enjoying my moment, with my band, my instrument in front of my audience and think ‘how nice of you to introduce me to the guitar, guitar playing and all this music because this is what I really enjoy doing.’  That’s my father’s real gift to me.“
Blue Room is Ana and Milton’s gift to the rest of us and tangible recognition of the important role the father played in the former’s development as an internationally celebrated star in her own right.