Duke Robillard and The Pleasure Kings - Too Hot To Handle 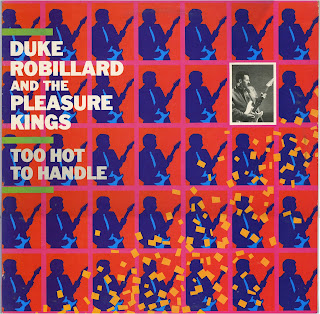 Duke Robillard is one of the founding members of Roomful of Blues, as well as one of the guitarists who replaced Jimmie Vaughan in the Fabulous Thunderbirds in 1990. Between that time, Robillard pursued a solo career that found him exploring more musically adventurous territory than either Roomful of Blues or the T-Birds. On his solo recordings, the guitarist dips into blues, rockabilly, jazz, and rock & roll, creating a unique fusion of American roots musics. In 1967, Duke Robillard formed Roomful of Blues in Westerly, RI. For the next decade, he led the band through numerous lineup changes before he decided that he had grown tired of the group.
Robillard left the band in 1979, initially signing on as rockabilly singer Robert Gordon's lead guitarist. After his stint with Gordon, Robillard joined the Legendary Blues Band. In 1981, the guitarist formed a new group, the Duke Robillard Band, which soon evolved into Duke Robillard & the Pleasure Kings. After a few years of touring, Duke Robillard & the Pleasure Kings landed a contract with Rounder Records, releasing their eponymous debut album in 1984. For the rest of the decade, the band toured America and released a series of albums on Rounder Records. Occasionally, the guitarist would release a jazz-oriented solo album.
In 1990, Robillard joined the Fabulous Thunderbirds. Even though he had become a member of the Austin group, the guitarist continued to record and tour as a solo artist, signing with the major label Point Blank/Virgin in 1994 for Temptation. Duke's Blues followed two years later, and after one more album for Virgin, 1997's Dangerous Place, Robillard signed to Shanachie for 1999's New Blues for Modern Man. Conversations in Swing Guitar followed later that year, and the prolific guitarist returned in mid-2000 with Explorer.
Robillard switched to the Stony Plain label with 2002's Living with the Blues, and began a steady run of releases for the imprint, including a second pairing with jazz guitarist Herb Ellis for More Conversations in Swing Guitar (2003). Exalted Lover followed later that same year. Blue Mood, a tribute to T-Bone Walker, and New Guitar Summit (which teamed Robillard with guitarists J. Geils and Gerry Beaudoin) both appeared in 2004. Guitar Groove-A-Rama was released in 2006. Robillard continued to explore the jazz and jump blues path with 2008's A Swingin Session with Duke Robillard. He returned to his early R&B influences for 2009's Stomp! The Blues Tonight. His next album for Stony Plain, Passport to the Blues, saw him returning to the blues in all its gritty glory.