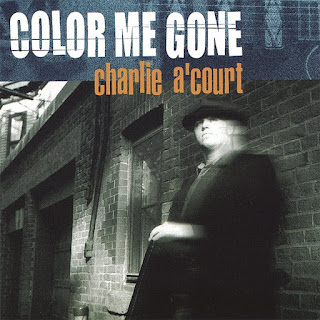 Combine a rich, rhythm & blues upbringing with soulful, adult-contemporary song writing and you have the foundation of one of Atlantic Canada's brightest new stars. 2004 ECMA nominee, Charlie A'Court has emerged as an emotionally charged and soul touching performer, whose music reaches out to others, touching audiences at venues all over. Whether it's his stirring solo performances, or his fiery full band concerts, A'Court takes the music down a direct path to the listeners' heart and soul.
With the release of his debut album, Color Me Gone, A'Court wrapped up a tremendously successful 2003, and has started off on the right foot for 2004. In 2003, Charlie placed 2nd in the acoustic division of the International Blues Challenge in Memphis, TN., as the only Canadian competitor. At the 15th East Coast Music Awards in Halifax, A'Court was nominated for Best New Artist as well as taking home the hardware for Best Blues Artist. A'Court also made his national debut on the televised show as a performer in a tribute to Canadian rock icon, Myles Goodwyn of April Wine.  In the past year, A'Court has toured extensively throughout Canada and abroad. With headlining performances under his belt at festivals like the Stan Rogers' Folk Fest, Riverfront Jubilee, Harvest Jazz & Blues Festival, Saint John Jazz & Blues Fest, Ottawa Blues Fest, A'Court has opened for high profile artists including John Reischman and the Jaybirds, The Fabulous Thunderbirds, Harry Manx, Colin James, and ex-Rolling Stone guitarist Mick Taylor. A'Court has also recently launched an international career by releasing Color Me Gone in Europe. Accompanying the release were two very successful tours throughout Germany, opening for Australian slide-guitar legend Dave Hole, Sugar Blue (former harmonica play for the Rolling Stones), and legendary British r&b/rock group, Procol Harum, whose most recognizable hit is Whiter Shade of Pale.
A'Court's momentum in 2004 has shown no signs of slowing down. Charlie was nominated for Best New Artist at the Maple Blues Awards and Best Male Artist at the East Coast Music Awards earlier this year. A'Court has been writing new material for his follow-up album, released a live album in Europe with a successful tour that involved opening for classic rock legend, Vanilla Fudge, opened a Maritime tour for blues rocker George Thorogood & The Destroyers, and made a special guest appearance on Dave Gunning's new album, two-bit world. A'Court also had one of his songs, Be My Angel, included on a Keith's Beer Compilation CD in which over 45,000 copies have been distributed. The album's debut single, "You've Got a Friend in Me" has been grabbed by radio stations across Atlantic Canada as well as receiving regular, national air-play on CBC radio. Halifax rock station, Q104 placed the single at #50 on their Top 104 Songs of 2003 and at #5 on "Route 104" - Top Ten Homegrown Tunes of 2003. The single also charted 12 weeks on the Rock 20 Countdown. The follow up single, "Carolina", was received with open arms and reached the #2 position on the East Coast Kitchen Racket - Top Ten. Charlie's modern blues style, mixed with his contemporary songwriting has created a mass appeal, enabling A'Court's material to be added to regular and heavy rotations on rock radio and adult contemporary stations. Fueled by emotion and a desire for delivering powerful music, Charlie A'Court is grabbing a hold of the music industry and attracting the attention of audiences everywhere with gutsy vocals and his colourful yet solid guitar playing.