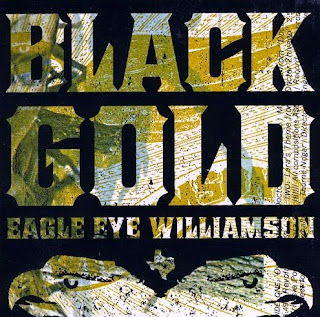 Blues influenced soul rock. Dirty, raw and real. One man band plays guitar, drums and sings all at once on every track. All tracks recorded in one take with NO overdubs.
Imagine a room thick with sound. Dense walls vibrate with reverberations from a distorted guitar; floors shake with each kick of the bass drum. Each intricate layer combines to create a distinctive composition; excitement grows within. Expecting to see three people on-stage performing, this forceful sound instead lies within the workings of one, passionate man. Eagle Eye Williamson creates a uniquely raw and gritty sound reflecting his nature as a simple, work-a-day man. The organic quality of the music produces an unlikely raucous; it’s hard not to become intrigued when listening.
Watching Williamson play can at first be distracting. An unassuming man sits behind a small drum-kit configured to his liking. In his lap a guitar, perfectly positioned. As he begins to play, his feet tap the drums that construct the rhythm of the songs. With his left hand, he works the fret board of his electric guitar as his right hand switches between striking the snare drum and cymbals. Each layer expands as Williamson begins to sing. The experience, at first fascinating soon turns to exhilaration.
Williamson, 34, a proud sixth generation Texan, lives in Austin. At the age of 15, a bike accident severed his optic nerve, rendering him unable to see through his right eye. Not long after, Williamson began to notice differences between he and his friends. “I could find a needle in a haystack,” he boasts. “I have a million stories where I’ve spotted objects long before my friends or family.” For 19 years Williamson went by the nickname Eagle Eye. When it came time to choose a name for his one-man-band, Williamson realized a common theme among the names of his favorite blues singers. Many of the blues musicians he admired formed their monikers by combining their nicknames with last names. With this, “Eagle Eye Williamson” came into existence.
Williamson’s inspirations like John Lee Hooker and Jimmy Reed occupy his rough, unprocessed sound. “Those musicians faced struggles to be who they were in that time period,” says Williamson, “you do your own work and no one does it for you.” Williamson’s life reflects such feelings. A hard-working man with a humble demeanor, Williamson aspires to evolve as a musician. Working diligently, Williamson writes and composes each song, combining the worlds of creative song writing and flawless execution. On top of that, each track is recorded on a single microphone in a single take. The songs on the album sound the same as attending an Eagle Eye Williamson show.
A little over year ago, Williamson began playing in Austin. In that time, an increase in his regular performances and special opening slots demonstrate that he is well on his way. Williamson also held a residency at Lamberts, known in Austin for its first-rate barbeque and live music. By performing at well known Austin venues such as: Club DeVille, Hole in the Wall, The Scoot Inn, Mean Eyed Cat and more, Williamson continues to introduce his unique brand of music to the Austin scene.
Though Eagle Eye Williamson may initially give an impression of a rough and tough whiskey-blues band, quite the opposite is true of his character. “I enjoy sharing my talent with people,” he says with a warm smile. “People care because they see I care.” Such crude talent won’t stay hidden for long.