Arthur Williams - Harpin' On It 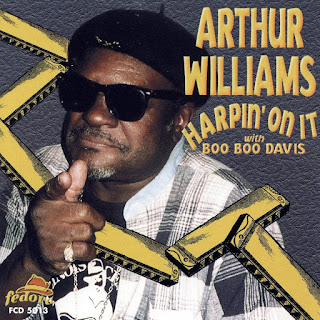 Mississippi-born harmonica ace and blues vocalist Arthur Williams was associated with the late Frank Frost and played on Frost’s recordings for the Jewel label. After relocating in St. Louis in 1972, he became a part of that city’s under-recognized blues scene plying with the likes of Tommy Bankhead and Big Bad Smitty. Fedora has just issued his first album, Harpin on It, which provides some choice performances of what he calls “Mississippi Blues with Chicago Drive.” He is backed here by a small band that includes James ‘Boo Boo’ Davis on drums, pianist Bob Lohr , guitarist Jimmy Lee Kennert and bassist Charles ‘Nephew’ Davis. Williams shares the vocals with drummer “Boo Boo” Davis, with Williams covering Jimmy Reed’s Can’t Stand to See You Go, Mercy Dee Walton’s One Room Country Shack, and J.B. Lenoir’s Mama Talk to Your Daughter, while Davis handled originals like Ain’t Going Back to East St. Louis and Talkin’ Too Much. The title track is a Little Walter flavored instrumental which I believe was originally recorded as a harp duet with Frost for Jewel. While Williams sings quite well, when Davis handles the vocals, the music gets a bit more raucous. One can understand that people were talking about how they turned the tent stage at the recent Poconos Blues Festival into a juke joint. While the album never gets that rowdy, one can get a sense of just how these musicians can get a good time rocking and a rolling. Fans of downhome blues sounds will certainly find much to enjoy here.