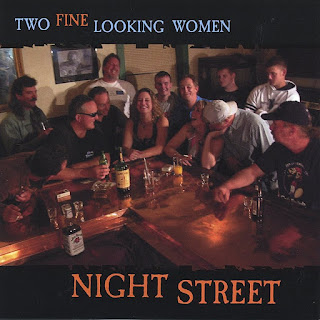 The band Night Street has been in existence since 1989 with a wide range of great musicians over the years with one common goal. Play good time music and have fun doing it. Chris McAfee and Brian Kendig both guitar players singers and song writers formed the band and have been going strong ever since. The rhythm section Rick Tremble on bass guitar and Billy Meyers on drums are the soul of this band. These two have been playing together in bands since the late 70’s and work together like a fine tuned engine. Night Street has played many of the areas blues festivals over the years. They have shared the stage with such performers as Bernard (pretty) Purdy, Hank Carter, Kim Waters, Anson Funderburg and the Rockets with Sam Myers, The Nighthawks, The Hudson River Rats, Lil Ed and The Blues Imperials, Michael Hills Blues Mob, Alvin Youngblood Hart, and Roy Gaines to name a few. The band won the 2001 and the 2003 blues challenge and represented the Baltimore, Washington area in the International Blues Competition in Memphis. This group can still be caught playing the locale blues haunts. They love the atmosphere of the smokey crowded club. This is where the band excels and feels at home.