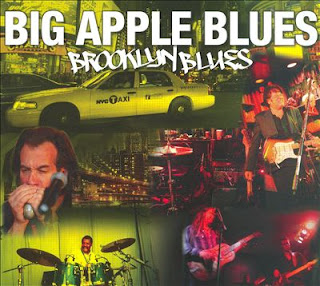 Big Apple Blues (formerly Stone Tone Blues Band) newest release is called "Brooklyn Blues", so named for the fact it was recorded in a Brooklyn Recording Studio, namely Excello Recording. The actual music on "Brooklyn Blues" is referred to as "Chicago-style electric blues of mid-century Middle America" and if that was all there was to this album, one would probably think it was just another half decent run of the mill Blues release. That of course couldn't be farther from the truth as "Brooklyn Blues" went that extra extraordinary step of not only playing the style of music they did, but also playing it in it's truest representation of sound, going back to the old days of recording with the help of vintage analog recording equipment such as "ribbon and tube microphones feeding the transformers of Neve preamps and equalizers, and ‘golden-age’ vacuum tube-based signal processors rocking the meters of the Studer and Ampex tape machines." There were no separate rooms for this recording, as it was all done with the band playing together in one big room, allowing a wonderful Live feel to "Brooklyn Blues", made more so by allowing the 'bleed' of instruments to seep into other microphones. Paying this much attention to the sound truly made it possible for us to hear all the great songs on "Brooklyn Blues", as close to what they originally sounded like, when first recorded many years ago
"Brooklyn Blues" consists of 12 great Tracks of Chicago style blues, with 10 fabulous covers and 2 superb originals. The players on "Brooklyn Blues", whom either performed on all the Tracks or just a few, included Zack Zunis (Guitar), Barry 'The Baron of the Blues' Harrison (Drums/Vocals), Anthony Kane (Harmonica/Vocals), Admir 'Dr. Blues' Hadzic (Bass), Hugh Pool (Vocals/Maracas/Backup Vocals/Hand Claps), Brian Mitchell (Piano), Christine Santelli (Backup Vocals), and Matt Mousseau (Backup Vocals/Hand Claps). Zack Zunis is credited with writing one of the originals, Track 3 "Brooklyn Swamp", which is an instrumental, and Anthony Kane is credited with writing the other original, Track 8 "Who's On Third (Duvel)?". The covers for "Brooklyn Blues" were songs of such greats as Paul Butterfield ("Too Many Drivers"), Chester 'Howlin Wolf' Burnett ("Killing Floor" and "How Many More Years"), Big Joe Turner ("Honey Hush"), Dave Bartholomew ("Whole Lot of Lovin" and "I Hear You Knocking"), Antoine 'Fats' Domino ("Whole Lot of Lovin"), Amos 'Junior Wells' Blakemore Jr. ("It's My Life Baby"), Marion 'Little Walter' Jacobs ("Hate To See You Go" and "Everything Is Gonna Be All Right") and Willie Dixon ("Mellow Down Easy").
All the Tracks on "Brooklyn Blues" were done beautifully, especially the covers, for which I am sure that the originators would of been proud of. The sound was simply put, superb, with the choice of the way this album was recorded, as being spot on. As for picking out favorites on this album, that was not a easy task, especially trying to pick from such a steller lineup of songs, but a few that stood out were, the opening Track "Too Many Drivers", Track 3 "Brooklyn Swamp", and Track 11 "Everything Is Gonna Be Alright".
If it were not for the exceptional way in which "Brooklyn Blues" was recorded, I would of still given this album my highest rating of 5*****, but since it was recorded in the was it was, well that is just the icing on the cake. I can't wait for more from Big Apple Blues, especially if they record it in this style. Highly Recommended and Thoroughly Enjoyed...