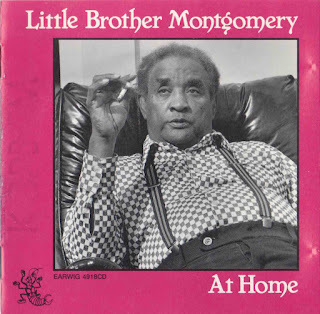 Singer/pianist Eurreal "Little Brother" Montgomery tickled and thumped the ivories playing the blues, boogie-woogie, and stride styles for almost seventy years. His last recordings-most made in his living room between 1967 and 1982- are recommended not so much to sentimental boogie mavens as to anyone who wants to experience the autumnal glow of a keyboard giant.
Of course, Montgomery's career goes way back beyond that. He was born in Louisiana in 1906, and according to usually reliable sources, began to pick at the piano when he was four. At the ripe old age of 11, he left home to play the barrellhouses of Louisiana, modeling himeself after, among others, Jelly Roll Morton, who was a visitor in his home when Montgomery was just a lad. And he first recorded in the late '20s, on a trip to Chicago. He recorded some fine sides for Bluebord in the 1930s.
Yes, he was a blues piano player, but his smooth and rippling style also lent itself to work in jazz, with jazz bands, at a time when blues and jazz seemed a lot closer than they do today.
Listening to some of his work, it's very impressive just how smooth he was, with an almost lazy, loping style that was elegant in its simplicity, yet full of innovation. His vocals tended to be high-pitched in his earlier years, but were still packed with emotional content. He wrote much of what he played, but sometimes covered other great songs as well. His left hand created a solid foundation for the melodic structures of his right hand.
He wrote traditional blues lyrics with the best, but his instrumentals stood on their own. On the tracks on "Tasty Blues," the guitar bass, piano and drums produced tight, melodic, powerful tunes in such simple sturctures that they sound almost effortless. It's really great music -- not just great blues. And that's why the blues is such a powerful music -- it works on multiple levels, filling heart, mind and soul with passionate music.
And o course, unlike way too many players today, he played a real piano, not an electronic keyboard. I think many modern blues fans have lost touch with the warmth of a real keyboard. Yes, I know that bands can't fit one in their vans, and that most clubs don't have one handy. But when they do, it's a pleasure to hear the music sound like it was first played. It's a shame that you can still hear fine acoustic guitar music, but much less frequently hear blues piano played like it was played back in the primeval blues days.
Montgomery died in 1985, but had managed to make good use of the blues revival in the '60s and '70s, traveling to national and international festivals, and continuing to record, getting at least some credit for his massive contributions to the blues piano genre. He wasa  true living link to the origins of bues and jazz.
You could do a lot worse than find a few of his CDs to insert into your collection and pull them out when you want to hear some great old piano blues, played by one of the originators.