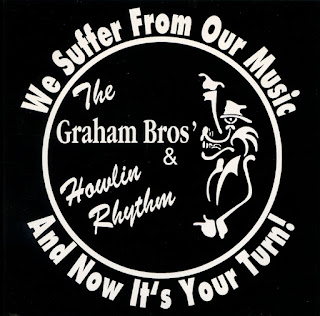 A great example of what happens when you take a couple of Midwestern guys from Michigan, send them to college in Texas, and expose them to the great blues sound of Austin. From influences, such as Stevie Ray Vaughn, Omar and the Howlers, and the Fabulous Thunderbirds, the Graham Brothers learned the importance of playing what you feel and feeling what you play.
The Graham Brothers have been touring regionally in West Texas, Northern Michigan and Wisconsin for the better part of 15 years. Their unique blend of Blues, Classic Rock, Folk and Jazz is reflected in the original music on two CD releases. The first CD titled "We suffer from or music and now it's your turn" was released in 1995. The second CD titled "Enjoy the Ride" released in 2004. The Caprock Sun of Lubbock Texas describes their music as "Powerful" and packed with hard drivin' Texas Rock.
The brothers-- Rob and John Graham have been writing music and playing together since they were teenagers. The band is currently defined as a four piece ensemble featuring John on lead vocals, rhythm guitar and occasionally lead guitar, harmonica and alto sax, Rob on lead and rhythm guitar and occasional Keyboards, Jesse Barabe on all things drums and percussion and back up vocals, and Jamie Martin on bass guitar and back up vocals.
You can follow the Graham Brothers as they continue to write, record and jam their way into the 21st century and journey through life by logging into their web site WWW.HOWLINRHYTHM.COM. CD releases can be purchased by logging on to Amazon.com. Feel free to BLOG on with John and Rob.