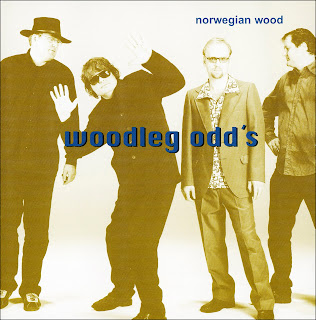 Groovin' and soulful Norwegian blues but with elements of rock and pop. All originales performed in a magnificant way . Check it out....
It has been told that the roots of the blues were brought to America by Africans. Another legend says that the Europeans came to America with Columbus.
The vikings of Norway, however, know better. When Columbus arrived in the 15th century, their main task appeared to be the hiding of several hundred years old traces from the vikings. Traces like red amanita, beer bottles, and guitar strings that had broken under excessive bending of blue notes. Very few people are aware of the fact that there are still a remaining tribe of this vikingblues people living in a wooden house on the west coast of Norway. In this very house, viking ships are still being built accompanied
by viking blues, played on wooden instruments. In fact, the drummer Odd Ludvik?s foot is as well a wooden instrument,
as a result of an earlier battle. A mast from one of the viking ships now serves as the foot that drives the bass drum pedal.It also gave a name to the band.
Woodleg Odd?s second album "The Right Track" made the Odd vikings conquer a significant area of Norway.
Some places, like at the blues festival in Notodden Norway 2002, the blues heads were given in so roughly, that Woodleg Odd?s decided to leave the country for a while.
The odd vikings? performed a succesful tour in the Connecticut area in Oct/Nov - 2003 and did a lot of gigs and radio/TV shows. After the release of their third album "Norwegian Wood" in 03/04 things really started to happen. The band achieved lots of compliments and great reviews for this album, which resulted in heavy touring in Norway and England, visiting legendary clubs like Borderline and Ain't Nothin' but the Blues in London City. Woodleg Odd's also accomplished a new successful US-tour visiting 6 States in Dec.- 2004.
There's more to come in 2005 and 2006, but in the meantime CHECK OUT this great album !