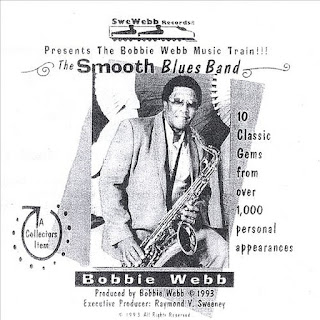 A native San Franciscan, Bobbie Webb has always had music in his home. He is now a world class musician widely sought after for his sax playing and also for the horn sections that he leads. You may see Bobbie Webb performing in his own band, or backing some of the greatest blues musicians as they travel through the San Francisco Bay Area. He has played with the best of them and has paid his dues. To see Bobbie Webb in action is something you don’t want to miss. Bobbie Webb is a musician you can count on to get the job done right-in style- every time. Whether performing with his Smooth Blues Band, or backing blues greats on tour, Bobbie Webb is “The Man.” He cites influences that include B.B. King, Bobby Bland, Charles Brown, Albert King, Little Milton, Clarence “Fillmore” Sims, Frankie Lee, Lowell Fulsome, John Lee Hooker, Eddie “Cleanhead” Vincent, Charles Brown, Charlie Musslewhite, Al Rapone, Queen Ida, and many, many more. He has recorded albums with Percy Mayfield, Al Rapone, Maxine Howard, and others. In addition to working full time as a musician, Bobbie Webb serves as president of The Blues and R&B Music Foundation, Inc. The Foundation is a direct result of Bobbie’s experience in the fields of music and administration. The Blues and R&B Music Foundation is a nonprofit charitable organization established to promote, sponsor, and preserve the blues. Bobbie Webb has functioned as director and producer, in addition to performing on stage as a musician, bandleader, and host. The Foundation also works to provide instruments to young children who need them and to help elder and established musicians with benefit events in times of need. Since 1995, the organization has promoted and produced the annual California Blues Festival on Memorial Day in Golden Gate Park in San Francisco. The festival features five hours of great musical performances in a comfortable, laid-back, family environment.