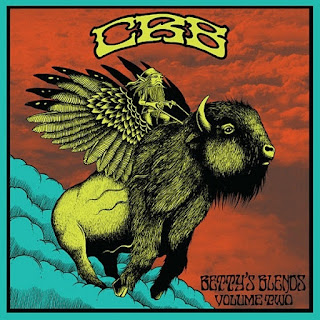 On June 2 Chris Robinson Brotherhood will release Betty's Blends, Volume Two: Best Of The West via Silver Arrow Records. The new live album was recorded and mixed by longtime Grateful Dead sound engineer and recordist Betty Cantor-Jackson.
The nine-track collection features performances captured throughout The CRB's 2014 summer tour of the western United States, including "Rosalee" from the Henry Miller Library in Big Sur, "Shore Power" from Terrapin Crossroads in San Rafael, "Burn Slow" from Cervantes' Masterpiece Ballroom in Denver and a 15-minute plus version of "Vibration & Light Suite" from Theatre Deville in Vacaville, CA. In addition to CRB originals, the set includes a pair of covers that are staples of the band's live shows: "They Love Each Other" by The Grateful Dead and "Driving Wheel" by Tom Rush. Betty's Blends, Volume Two: Best Of The West will be issued by Robinson's label, Silver Arrow Records, as a limited edition release with only 2000 2-LP sets, 2000 CDs and 2000 downloads available. "Off we go on another sonic adventure through the ears and mind of the one and only Betty Cantor-Jackson," said Chris Robinson in a press release. "Clear some room, lay on the music and let the high times commence!".Also on the way from The CRB is a 2-song CD sampler in an Alan Forbes-designed CRB tote bag for Record Store Day 2015. The tracks on the sampler will include "Shore Power" from Betty's Blends, Volume Two plus The CRB's version of the Buddy Holly song, "Love's Made A Fool Of You" with The Grateful Dead's Phil Lesh on bass.