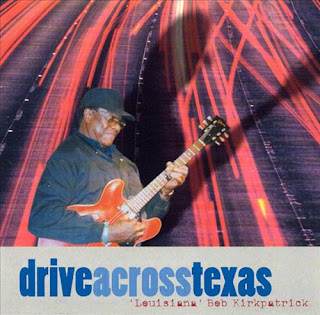 Until quite recently, you would indeed have to have driven across Texas to find anyone who had any idea who Bob Kirkpatrick was. Perhaps a few old guys in northern Louisiana might have put you wise too. but for many years Bob's live appearances have been largely confined to his adopted state. Born in 1934 in Hayensville, Louisiana, the son of a preacher man, Bob was forbidden to listen to the devil's music as a boy, but of course he did so anyway, sneaking down to the basement and listening to Lightnin' Hopkins and other blues artists on the radio. In 1952 he moved to a place of his own and thus could listen to the blues whenever he liked. In 1997 he made the trip over to Europe, and made such an impression with his clean, powerful singing and crisp, frill-free guitar playing that he hasn't looked back since. Recording sessions and further European tours have given Bob the chance to strut his stuff, and his reputation amongst blues lovers has steadily grown. Now, at last, he's made the record for TopCat Records which confirms what a major talent he is. 'Drive Across Texas' was, amazingly, cut not in the Lone Star State but in Lincolnshire, England, and it's the most exciting event that's happened in that gentle county since they opened the bean-canning plant. Ably supported by Steve Coleridge's band, this set shows what a strong and original songwriter Bob is - check the wry humor of 'She's In Love' or marvel at the neo-Chuck Berry 'Too Much Time'. His delivery showcases his wares perfectly; his puissant, deep-chested voice, with its exemplary diction, reminds us of Larry Davis, though there's a bit of Bob's idol B.B. King in there too. His guitar playing has elements of B.B.'s string-bending and that other blues King, Albert's bite and attack. But what you'll hear mostly is a whole lotta Bob Kirkpatrick. Can you believe that 'I Did Her Wrong' wasn't cut at J.D. Miller's studio in Louisiana? Can you believe that the marvelously low-down Southern blues 'Drove All Night' was cut in 1999, not 1959? And can you believe that there are still people who haven't discovered Bob Kirkpatrick? His fame has spread far beyond Texas and northern Louisiana these days, and this disc presents fifteen reasons why that should be so.