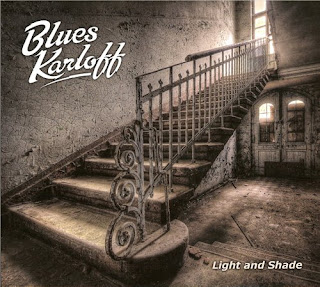 Unapologetically rooted in the British Blues-Rock boom of the late 60's and 70s, steeped in the tradition of Leslie West's Mountain, The Jeff Beck Group and early Led Zeppelin, Blues Karloff explore the outer reaches of the sounds that shaped this musical era. On their debut album Ready For Judgement Day, which was released in October 2014, the band saluted some of the Blues legends that every member of Blues Karloff had been listening to since childhood. The album featured songs by Robert Johnson, Jimmy Reed, John Lee Hooker, Albert King, Howlin' Wolf, and Muddy Waters; vintage Blues gems revisited, like the British Blues-Rock greats such The Yardbirds, The Pretty Things, Savoy Brown, John Mayall and his Bluesbreakers and Fleetwood Mac did back in the sixties and seventies; blistering interpretations of classic Blues anthems reinterpreted in their own distinctive fashion, introducing a contemporary flavour to the genre. The album was all about the influences; Black and White, British and American, that shaped the musical tastes of the band members in their youth. Blues Karloff then road-tested material for their second album, which they started recording in February, and finished early September 2015. The band again revisited and remodelled both classic and lesser-known tracks by the likes of Willie Dixon, Jimmy Reed, Bobby Womack, and Tom Hambridge (who has been referred to as The White Willie Dixon by Rock and Roll Hall of Fame Inductee Buddy Guy). They also recorded their version of Looking Tired a great Jagger-Richards Blues number which the Rolling Stones originally recorded in 1965 during the sessions for the Out of Our Heads album at RCA Studios in Hollywood, but which until today remains officially unreleased. The remainder of the tracks on Light And Shade are songs written by various members of the band themselves, sensing the need to gradually carve out their own identity as well as demonstrating their developing skills as tunesmiths.