Al Grigg - Blues and Other Things 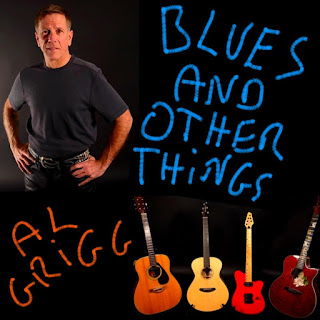 Al Grigg has enjoyed a pretty cool music career since his 1975 debut album with one of the pioneer indie bands, The Flying Dogs of Jupiter. Since then he has done a little bit of everything, from playing with a 50s/60s tribute band, to traveling to three continents while living overseas for a decade. Al returned to the United States in 2010 and formed The Fine Line, who he still plays with in the New York / New Jersey area. He gets out on his own too, with an upcoming tour abroad and a new solo CD to entertain his fans.  Blues and Other Things is the latest self-produced album from Grigg, and he did all of the heavy lifting on this one. Al wrote all seven of the songs (some of them from Flying Dogs of Jupiter albums), took the lead on all of the vocals, and played all of the guitar and drum parts. Guest artists Greta Tristram (harmonica) and Frank Kaiser (rhythm guitar) joined him on this project. Looking at the sleeve for this disc, it appears that Al Grigg is a bit of tone junkie, as he made notes of the different guitars and amplifiers that he used to get the desired sounds in the studio. It certainly worked out well, as you will hear in the opener, “All the Way Home.” This is a country rocker with hard and crunchy overdriven guitars, and Al’s voice goes all the way from smooth to jagged — he can really howl out the lyrics! This is followed up by a more straight-up blues tune, “Your Meal Ticket (I Ain’t Gonna Be),” which uses two or three layers of guitars to achieve a fun and bouncy beat under Griggs smorgasbord of double entendres. Keeping thing moving, the next tune is “It Just Don’t Have to Be That Way,” which provides a healthy dose of smooth rhythm and blues to accompany the heavy lyrics. Grigg lays down a very tasteful guitar solo on this one, and he has a wonderful feel for the instrument. Then the mood turns to country blues with “Dead End Boogie” which has some well-placed harp from Tristam and plenty of catchy guitar licks. There are a also a three rock (or maybe even pop) tracks. “I’m Gonna Jump Right Into the Fire” and “In Cecelia’s Garden” are well constructed, as their lush instrumentation and vocal harmonies go well with the lyrics which are thoughtful with good imagery. Finally, the set finishes up with seven minutes of “American Dream,” a hard-hitting Flying Dogs of Jupiter rocking jam where Grigg and Tristam get to finally cut loose with everything they’ve got. So, after listening to the whole thing it turns out that the album title is true: this CD really is full of blues and other things!