Geoff Carne - One To One 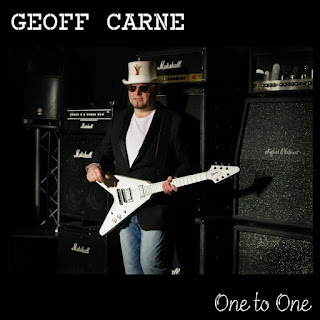 Geoff Carne can best be described as a British rock/blues guitarist and vocalist. Major influences include musicians Paul Rodgers, David Coverdale, and Don Henley. This CD has 9 originally written rocking tracks with the last two songs being acoustic versions of the aforementioned originals.
Carne started out gigging in the early 80’s doing the pub scene prior to locating to his home base of London in 1987. Near the end of 1988, Geoff teamed with West London rockers, Dream State City.  He continued playing locally with a few breaks until 1994 where he toured mainly as an acoustic artist in United Kingdom pubs and bars. In 1998, Geoff joined with producer/musician Paul Mex and that helped broaden his musical abilities. “One to One” showcases the artists rocking roots, flair for guitar driven tunes, and blues roots background.
Highlights from the record include:
Song 7: “One to One”-This one is sexy song about connecting and passion. The upbeat musical arrangement makes for a feel good experience for the ears. The lyrics are about two people being attracted to each other and the journey that follows when everything is hitting on all cylinders. Carne’s web site notes the record One to One as being an album for the ladies. This track highlights that description.  This tune is also featured at the end of the CD as a bonus acoustic version. The passion really shines though on this song.
Song 8: “Deep and Dirty”-This tune is grooving from the opening note. Erotic lyrics and steady guitar help this song along nicely. “Take me down deep and dirty with you” leaves nothing to the imagination as to what is on the artists mind! Here again Geoff has decided to make this tune a bonus track at the end of the disc with the acoustic version. There is something to be said for the rawness and feelings of acoustic music.
Song 2: “Crazy Blues”-A track about love, lust, and longing. We have all had twisting, confusing, uncontrollable feelings in a relationship; these songs lyrics tell of just that. “Holding on to what I cannot control, without reason we win and we lose, still I wait for you…