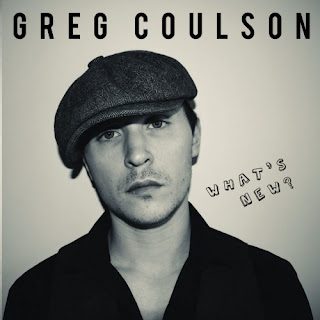 Following on from his performances at the Great British Rock and Blues Festival, the Top Secret Blues Festival and HRH Blues IV, super-talented Blues-Rock multi-instrumentalist Greg Coulson is to release his debut album,  ‘WHAT’S NEW?’ July 27th 2018. ‘What’s New?’ is an album of nine original songs written and arranged by Greg. It was recorded and engineered by Guitarist and Producer, Stuart Dixon at Platform studios, Reading and was produced by Dixon/Coulson. It features some of the finest  musicians in the UK including, Stuart Dixon: Guitar, Roger Inniss: Bass, Adam Gammage: Drums, with the addition of the Flatpack Horn Company on, ‘Stitch Me Up’, ‘Girls’ and ‘Sick Note’. It also features backing vocals by aclaimed Blues vocalist, Dani Wilde. Whilst the album stays true to Blues, it incorporates many other stlyes such as Rock, Jazz, Funk and Pop. From Hammond organ solos to heavy guitar riffs and catchy hooks, ‘What’s New? is sure to capture the imagination of any music fan.Greg is an accomplished and highly respected songwriter and musician with a track record including lengthy spells in the  legendary two tone/ska band The Selecter and in London's West End as a lead in Close Yo You: Bacharach Reimagined.Greg has his own special, fiery, impassioned brand of Rhythm & Blues, putting his own stamp on the music of the greats who inspire him - Ray Charles, Booker T, Taj Mahal, Steely Dan, Little Feat and more. ‘What’s New?’ breathes new life into what is often considered vintage music, reminding people of all ages of why this music was once so prevelant.Greg has been selected by an extensive panel of industry experts to compete on 8th september in the UK Blues Challenge, for the UK Blues Federation, the winner of which will represent the UK in prestigious competitions in Europe and the USA.